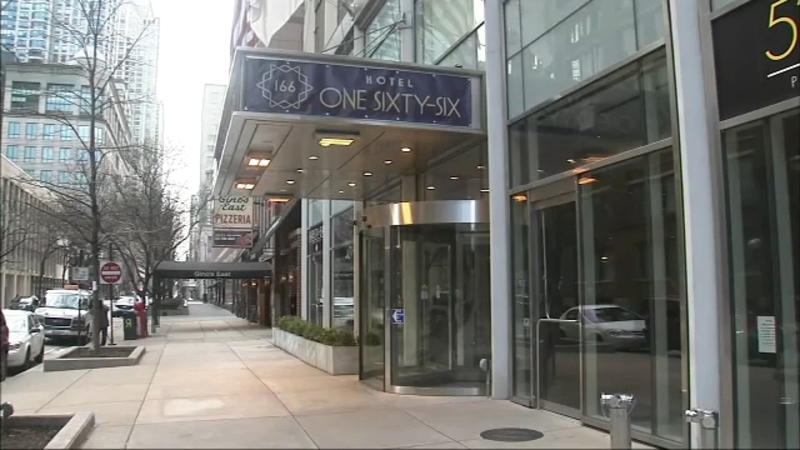 The city made a deal to rent vacant hotel rooms to shelter mild COVID-19 patients and vulnerable populations amid coronavirus pandemic.

CHICAGO (WLS) -- Mayor Lori Lightfoot convened housing and social service commissioners to announce Monday that the city will rent vacant hotel rooms for Chicagoans who are either waiting for test results or experiencing a mild case of the disease.

The patients would come from the city's homeless population, domestic shelters, or even those seeking to isolate themselves to avoid getting others sick. City health staff will be the only people directly treating the sick.

"We are all in this together and we are leaving no one behind," Lightfoot said.

The rooms will be rented for an average of $175 a night and will take the pressure off a city health system that still has "hundreds of beds to spare."

Mayor Lori Lightfoot has a new plan to rent thousands of hotel rooms for people diagnosed with or exposed to the coronavirus.

The first venue will be Hotel 166 on the Magnificent Mile. The city helped resolve a labor dispute with the Unite Here Local 1 union representing hotel workers there.

"These are unprecedented times. Chicago hospitality workers are in their hearts hospitable people," said Karen Kent, the CEO of Unite Here Local 1

By the end of the week, the city says it will be able to house up to 2,000 people in dark hotels.

"We have had quarantine ability in the city since January," said Dr. Allison Arwady, the commissioner of the Chicago Department of Public Health. "We have protocols we have been thinking through the details and these announcements represent the next step."

The YMCA of Metro Chicago will also offer three facilities for similar accommodations. They said they knew when the St. Patrick's Day parade was cancelled their buildings would go dark.