Coronavirus Update: 'Stay-at-home' order in effect in Illinois as COVID-19 cases rise to 753, with 6 deaths 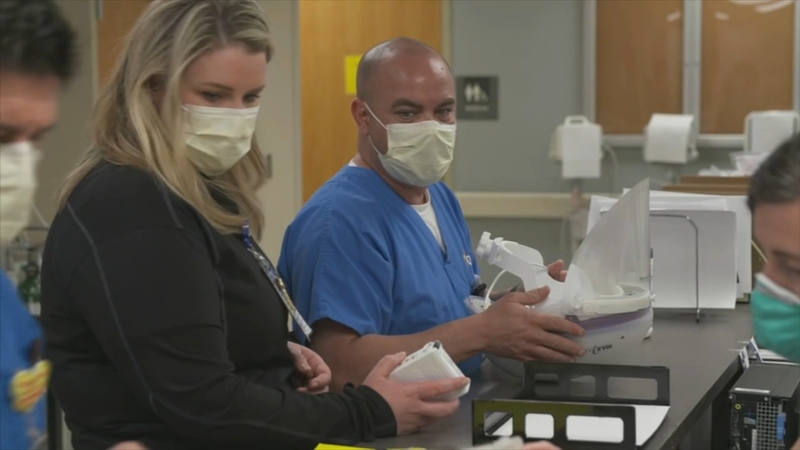 CHICAGO (WLS) -- Illinois' "stay-at-home" order is in effect for all 12.5 million residents Saturday evening in a statewide attempt to limit the spread of COVID-19.

The order began at 5 p.m., after Gov. JB Pritzker and state health officials announced 168 new coronavirus cases and another death in Illinois Saturday. The spike brings the state's total to 753, with 6 deaths.

The Illinois Department of Public Health said a Cook County man in his 70s died after being diagnosed with the virus.

There are now cases in 26 counties in Illinois, including DeKalb reporting its first case. Patients range in age from 3 to 99.

Of the state's six deaths, four were residents of Cook County.

Gov. Pritzker encouraged everyone to follow the "stay-at-home" order, which will remain in effect through Tuesday, April 7.

Pritzker stressed Saturday that you can still go to the grocery store and the pharmacy, check on your family and friends and go out for a walk. But the goal is to stop the spread of the virus and help those on the front lines.

Governor JB Pritzker's "stay-at-home" order will go into effect for all 12.5 million Illinois residents Saturday at 5 p.m. in an effort to limit the spread of COVID-19.

There are fears the number of cases over the coming weeks could put hospitals over capacity. State health officials are growing concerned about staffing and equipment for medical workers.

Pritzker issued a call to action Saturday, asking retired doctors and nurses to come back and reapply for their licenses to help with this fight.

"These applications will be processed on an expedited bases," Pritzker said. "And we'll be coordinating with hospitals and health care sites throughout the state to deploy these re-enlisted medical professionals to the front lines."

He also said the federal government isn't stepping up to combat the virus, noting the limited number of testing kits delivered to the state.

As the nation fights this pandemic head on, the governor is calling for unity. Pritzker criticized those who have used the virus to make racist comments and engage in racist acts.

"The virus is not tied to any specific ethnic group or race," Pritzker said. "Suggesting otherwise or engaging in racist speech or acts is one of the most profoundly un-American things that I can think of."

Illinois "stay-at-home" order announcement sent many people scrambling to stock up on supplies, but state officials assured the public that suppliers are prepared.

Illinois' "stay-at-home" order came one day after the governor of California and hours after his New York counterpart ordered all non-essential workers to stay home.

RELATED: What is and isn't allowed during a shelter-in-place order

Under the new order, essential services - such as grocery stores, gas stations and pharmacies - will remain open, but all non-essential businesses will be forced to stop operating.

People can still leave home to buy food, get medication, go to the doctor and take walks outside.

Although the order doesn't change many of the rules state and Chicago leaders put into place in the last week, people still took it as a cue to stock up on supplies.

Illinois and Chicago officials sought to reassure the public that they are in close contact with suppliers, which plan to be stocked.

"I want to stress there's absolutely no need for people to rush to the grocery stores or hoard any food or supplies," Chicago Mayor Lori Lightfoot said. "We are in constant communication with major retailers to maintain a strong food supply. They have and they will."

Illinois' action now means more than one in five Americans are under stay-at-home orders. That includes everyone in New York, California and Connecticut where violators are being threatened with fines. People across New Orleans have also been ordered to stay home. Meanwhile restrictions are in place in New Jersey, Pennsylvania, and Florida where several beaches have been closed.

Illinois Gov. Pritzker has extended the statewide school closure, which was initially going to end on March 31, until April 7. On Thursday, Lightfoot extended the closure of Chicago Public Schools until at least April 20.

Mayor Lightfoot backed Gov. JB Pritzker's "stay-at-home" order, and said the city and state must be intentional in taking steps to "flatten the curve."

Lightfoot added that the CTA will remain running through the "stay-at-home" order, and essential city services, such as garbage collection, will continue. However, all Chicago Park District facilities and libraries will close while the governor's order is in place.

The governor said this order is not one he takes lightly and one that was made after talking to health care experts, mathematicians and looking at the modeling for what will happen without taking this drastic action. Pritzker said he enacted the order to avoid the "loss of potentially tens of thousands of lives."

"Left unchecked, cases in Illinois will rise rapidly," Pritzker said. "Hospital systems will become overwhelmed. Protective equipment will become scarce and we will not have enough health care workers or hospital beds or ventilators for the overwhelming influx of sick patients."

Lightfoot then laid out what the city of Chicago is doing to prepare hospitals for more coronavirus cases in the days ahead.

"Our city - in the absence of leadership from the federal government, frankly - is doing the following: finalizing and securing quarantine and isolation locations, bolstering hospital capacity, supporting our health care workers and first responders, and doing everything possible to relieve the pressure on them. And we're building a supply chain to make sure that critical equipment to the health care system - things like ventilators and PPEs - are available and given to areas of need."

Medical experts agree the "stay-at-home" order is critical to stemming the spread of the novel coronavirus.

"Why ask so much of people for just a few hundred cases? Because it's the only way to save those lives," said Dr. Emily Landon, of University of Chicago Medicine. "And now is the time because the numbers you see today in the news are the people that got sick a week ago. And there's still people today who got sick today, who haven't even noticed that they've been sick yet.They picked up the virus, and it will take a week to see that show in our numbers."


While many offices will have to shift to remote working arrangements, the governor's order will allow restaurants to remain open for pickup, delivery, carryout and drive-through service. The interstates, tollway and local roads will remain open to travel as will airports.

"This is not a lockdown or martial law," Lightfoot said. "As the governor said and I want to reiterate, Chicago's grocery stores, pharmacies and clinics will remain open and there's absolutely no need to change your normal purchasing patterns. What I mean is, do not take this direction as a reason to run to the stores, buy everything in sight, and hoard vital supplies."

The swankiest of the stores on Chicago's Gold Coast are closing up shop in the most dramatic fashion.

On Friday night, the swankiest of the stores on Chicago's Gold Coast closed up shop in the most dramatic fashion. From Prada to Dior, by Saturday evening just about every store on the block will be shuttered by state order.

"It's a ghost town," said Gold Coast resident Dustin Pickett. "It's as if no one lives here. It's insane."

The governor also gave the indication that the "stay-at-home" order could be extended, but did not lay out any specifics. As for enforcement, Lightfoot said police will not be arresting anyone, but may approach people and ask them to go home. She said she believes most residents will comply with the order, as many already are staying home.

Meanwhile, the Illinois Department of Public Health said the state is working to increase testing capacity by working with Illinois hospitals to implement testing within their facilities.

Additionally, the state is working with the U.S. Department of Health and Human Services, Wal-Mart, and Walgreens to set up drive-thru testing sites in the hardest hit areas of the state. These facilities will focus on senior citizens, first responders, and health care workers.