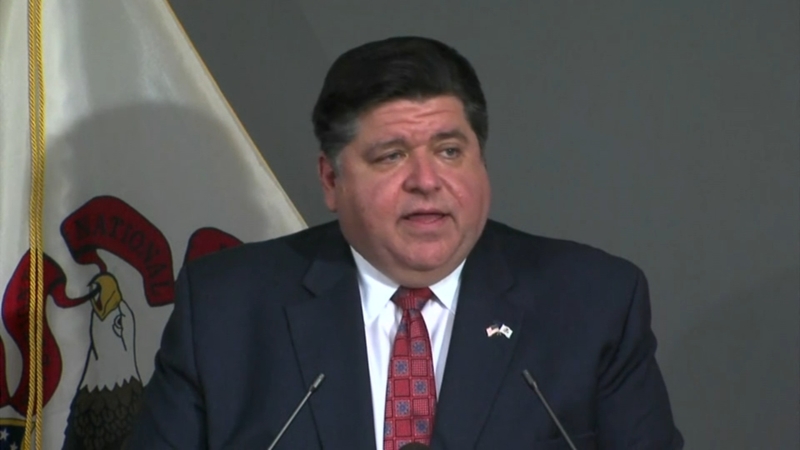 Pritzker bans gatherings of 50 or more

CHICAGO (WLS) -- With the primary election a day away, Illinois health officials announced Monday there are 12 new cases of COVID-19 in Illinois, for a total of 105 confirmed cases.

The Center for Disease Control says you should avoid large groups of people and stay at least 6 feet away from the nearest person.

Beginning Tuesday, all schools in Illinois, including Chicago Public Schools, will be closed until the end of March. Chicago restaurants and bars will close Monday night to help prevent the spread of COVID-19. Some restaurants will offer delivery and take out. Starting Tuesday through the end of the month, all Secretary of State driver services facilities across the state will be closed. All expiration dates for drivers licenses, vehicle registrations, and other documents will be extended 30 days.


From the state's Emergency Command Center in Springfield, Illinois Governor JB Pritzker announced a ban on gatherings of 50 people or more Monday.

"We are in a very serious moment of history of our state and our nation," Gov. Pritzker said. "It is imperative that our residents take responsibility for themselves, their families, and their communities at this moment."

Minutes earlier, President Donald Trump had announced new guidance recommending people stay away from gatherings of more than 10 people. He said it now could be "July or August" before life returns to normal.

Earlier, Pritzker joined other governors on a conference call with the president who called on states to work their own supply chains to obtain additional medical supplies.

"We need the federal government to lead, follow, or get out of the way," Pritzker said. "From the beginning, I've been pressing the White House for rapid test deployment nationwide."

Illinois officials announced Monday that the number of Illinois cases had reached triple digits. There is now a total of 105 cases of COVID-19 across 15 counties, including two new counties: south suburban Will and downstate Peoria.

Officials say with a limited number of testing kits, not everyone with symptoms can or will be tested.

"We are prioritizing testing for those who are at the highest risk of illness and ask those who have mild symptoms and do not meet those criteria to not demand to be tested," said Dr. Ngozi Ezike, Illinois Dept. Of Public Health.

How to stock up for coronavirus: What you need, and why you shouldn't panic-buy

With store shelves stripped bare, state officials made an appeal to the public to avoid hoarding.

"When people go out and buy more than they can really need, they are hurting our most vulnerable neighbors," said Alicia Tate-Nadeau, Illinois Emergency Management Agency. "Please stop buying more than you need. "

Despite the governor mandating the cancellation of any gathering of 50 people or more, officials are encouraging people to vote or early vote. They say voting machines, especially tomorrow on Election Day, will be cleaned regularly.

With Illinois' primary election now just one day away, there was a flurry of activity at early voting sites as people try to beat the crowds expected on Tuesday. That made it a bit challenging for voters trying to practice social distancing.

"Flattening the curve" refers to efforts in slowing down the spread of a virus even if it can't be stopped.

Long lines over the lunch hour at a downtown super site made the early voting experience a bit stressful for some as they tried to follow guidelines and keep a safe distance from other voters.

"We could probably be doing a little bit of a better job," voter Matti Shicker said. "They were they were trying to tell us to like get a closer together to let more people in line but we're all trying to keep our distance."
There were signs of tension between the Chicago Board of Elections and the Governor's office about whether the election should have been delayed.

"This is the biggest test that any jurisdiction has faced in the last 100 years period," said Jim Allen, spokesman for the Chicago Board of Elections.

"We have to have our elections continue in my opinion," Gov. Pritzker said. "This is the right thing to do."

The Chicago Board of Elections is offering training videos on its website and encouraging healthy people under 60 who have not traveled recently to help out and be an election judge after hundreds have quit.

"We don't know how short we are, but I can tell you that based on these last few days and especially today, we have had many, many, many judges cancel on us," said Marisel Hernandez, chairwoman of the Chicago Board of Elections.

"Our elected leaders are telling people not to congregate and to practice social distancing and one way to do that is staying at home. And that could result in people not coming out to vote as high as they usually do on Tuesday," Democratic political consultant Tom Bowen said.

"It concerns me because I'll be 90 in July and I I don't want to, you know, they say I am susceptible to it," early voter Laverne Smith said.

Normally the Chicago Board of Elections would have 100-150 election judges on standby, but with so many having quit they've now arranged for 600 judges to be on standby for precincts that need help.