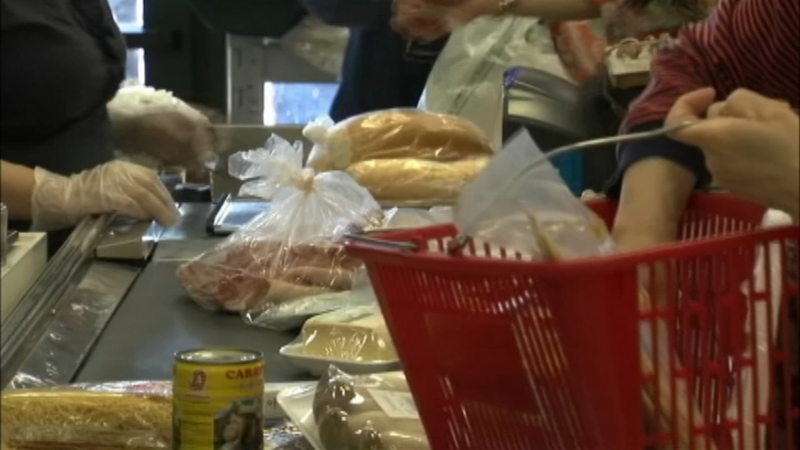 CHICAGO (WLS) -- Illinois Gov. JB Pritzker is offering up more state assistance to provide housing and food to those in need as the number of COVID-19 cases in the state surpasses 3,000.

There are now a total of 3,026 confirmed coronavirus cases in Illinois, including 34 deaths, as of Friday.

The virus has spread to 40 Illinois counties, with Bureau, Henry and Iroquois counties now reporting cases.

The number of COVID-19 cases in Illinois has surpassed 3,000, with 34 deaths, state health officials announced Friday.

As another extraordinary week draws to a close, officials said fighting the virus means battling the clock.

Hospitals need time to grow their capacity and acquire the necessary medical gear ahead of what could be an avalanche of patients.

"This is a war. It's a war against a pandemic," Gov. Pritzker said. "The federal government needs to lead, and until it does, we'll be a leader here in Illinois."

Gov. Pritzker has been calling on the White House to take such an action for days.

He's also sought out more health care workers as well. Hundreds of retired medical professionals are already heeding the governor's call to return to their fields.

On Friday, Gov. Pritzker asked all licensed health care workers to sign up for a new emergency alert system.

"So that in the event of an urgent need, our public health officials will be able to ask you for your immediate assistance," Gov. Pritzker said. "This includes all physicians, practitioners, registered nurses, physicians assistants, respiratory specialists, medics, LPNs, certified nursing assistants, podiatrists, dentists, anyone who has made a career in the medical profession."

The governor requested that anyone in the medical field register for the alerts on the state's website: https://illinoishelps.net/.

"People who live in a certain area of the state, we might say, 'Hey everybody, we need 100 or 50 of these kinds of professionals, please let us know if you're available this afternoon, this evening to come to this location to help us out," Pritzker said.

More money will now be available for emergency day care providers who are caring for children of essential workers. There's also $6 million being directed to agencies helping those experiencing homelessness in Illinois.

More federal dollars are also coming in for those needing assistance with food through the federal SNAP program.

The Illinois Department of Human Services is increasing monthly SNAP benefits and expanding access to the program. It could mean doubling existing benefits for many residents, according to Pritzker's administration.

"We at IDHS want all eligible people to receive these life-altering and life-sustaining benefits, and I want the public to know these temporary benefit increases are designed to help more families withstand the extraordinary pressures many are facing during this emergency," said Grace Hou, the department's secretary.

With the number of Illinois cases continuing to rise sharply, the governor said he's still evaluating whether to extend the "stay-at-home" order past April 7.

"If I knew then what I know now, perhaps I would've put a 'stay-at-home' order back when we shut down St. Patrick's Day parades, but we're evaluating the science as it comes in and making the moves that we think are necessary," he said.

Gov. JB Pritzker's frustration was clearly on display Thursday, and he admonished those who are violating his "stay-at-home" order.

"The virus doesn't care that you're bored and want to hang out with friends," Pritzker said.

The governor said he was begging people to look at the big picture and realize they have to make sacrifices for the good of others.

"Throwing all caution to the wind is not acceptable," Gov. Pritzker said. "You're putting family and strangers in danger when you come into contact with them."

Many nonprofits trying to help those in need during the COVID-19 outbreak are facing a crisis of their own.

Gov. Pritzker launched a new public-private partnership called the Illinois COVID-19 Response Fund Thursday to support local community organizations across the state. Already more than $23 million has been donated to the fund.

Penny Pritzker, the governor's older sister, will be administering the fund.

The governor said he and his wife have personally donated $2 million, and his foundation has donated another $2 million.

On Thursday, Gov. Pritzker also issued an executive order that will keep new inmates from being admitted to state prisons, aside from some limited exceptions.

So far, 12 corrections staff and prisoners have tested positive for COVID-19.

Pritzker said the decision aligns Illinois' tax day with the federal government's and gives "millions of taxpayers three additional months to file their individual returns."
Tax preparers were among those who had been pushing for the three month postponement, which the governor said will not greatly impact the processing of tax refunds.

Officials are concerned more than half the state's hospital beds are now occupied.

Pritzker said shuttered hospitals, like Metro South Hospital in south suburban Blue Island, may be reopened.
The state is also calling on existing hospitals to expand. Rush University Medical Center has already turned a lobby space into an area for treatment.

Another issue is staffing. Last weekend, Pritzker made a plea to retired health care workers, asking them to help with the influx of patients. The governor said 180 people applied in the first 24 hours.

RELATED: Coronavirus Illinois: What is and isn't allowed during a stay-at-home order
When asked if he'd extend the "stay-at-home" order past April 7, he responded, "I'm trying to follow the science here, and I am concerned that we may have to extend that deadline."