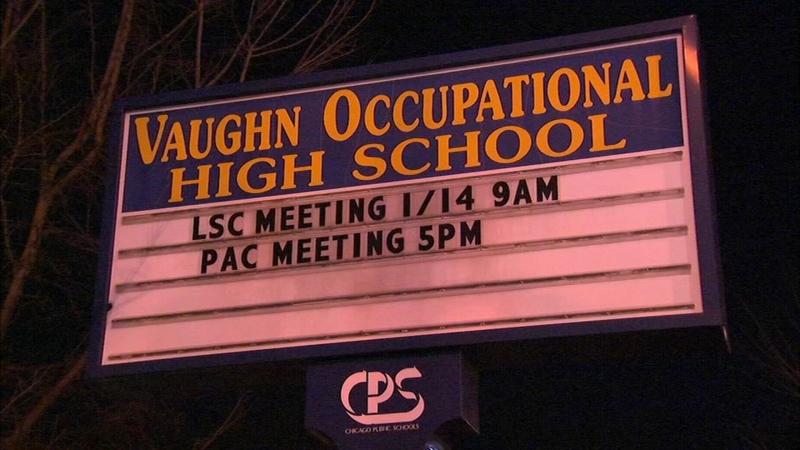 CHICAGO (WLS) -- A sixth case of novel coronavirus in Illinois was announced Friday evening by health officials in Chicago.

The woman was a passenger on the Grand Princess cruise ship that docked in San Francisco in February. The same ship is now quarantined off the coast of California with more than a dozen new cases of the virus.

Officials said that on Feb. 21, the woman disembarked the Grand Princess following a cruise to Mexico. She returned to work sometime last week.

She was last at the school on Monday, according to officials. On Wednesday the cruise line announced a quarantine of the Grand Princess after passengers on that previous cruise to Mexico were learned to be infected. The woman was then tested for the virus by the state and got a presumptive positive result.

She is hospitalized in isolation, and her condition is stable, health officials said Friday.

"Our city's been working relentlessly to protect the safety and security of our students, faculty and staff," Lightfoot said.

CPS CEO Janice Jackson said classes at Vaughn would be canceled next week as a precaution. CPS is asking staff that may have been exposed to the virus to self-quarantine at home for 14 days.

Parents were notified by robocall. The Chicago Department of Public Health will also be reaching out to students and their families individually, Jackson said.

"It was a bit of a shock," said Cindy Ok, parent of a Vaughn student. "I'm just trying to let my family know what our next steps are."

The Chicago Teachers Union released a statement in response to the announcement, saying in part, "We urge educators, administrators, staff and students in all CPS school communities to continue to stay informed and take precautions regarding cleanliness. We also call on the district to rapidly ramp up its efforts to clean and disinfect all schools throughout the city to prevent the spread of the virus."

The union said CPS has assured them that Vaughn faculty and staff will be paid during the one-week school closure and any self-quarantine that is necessary.

"It goes without saying, our utmost concern is with everyone in the Vaughn school community," the statement said.

At the Friday evening news conference, which also included updates from Governor JB Pritzker, officials once again emphasized the risk to the public from novel coronavirus remains low.

The fifth confirmed COVID-19 patient was released from RUSH Medical Center Friday to recover in self-quarantine at home.

On Thursday, Illinois health officials announced a man in his 20s from Cook County had tested positive for COVID-19. Health officials said he had recently traveled to Italy, where he acquired the virus.

The man was treated at RUSH University Medical Center. He was released to home quarantine Friday, after doctors determined he would be able to recover at home, hospital officials said.

RUSH officials said while the patient is still showing symptoms, he "no longer requires hospitalization."

Earlier, U.S. Sen. Dick Durbin joined local health officials as well as CDC Deputy Director for Infectious Diseases Dr. Jay C. Butler to discuss how the federal and local governments are working together to respond to the novel coronavirus.

"Don't panic, don't be pessimistic, but be realistic and take it seriously," Durbin advised. "We want to make sure there is no spread of this coronavirus."

"At this point we're still in a containment strategy," said Dr. Ngozi Ezike, director of the Illinois Department of Health. "Any case that is identified, we are full court press at all levels of government."

"The question is now what do we do next? I think that we have to be prepared that this is the first of many appropriations. I think there will be others to follow," Durbin said.

With a fifth Illinois resident testing positive for COVID-19, Senator Dick Durbin met with local health officials and the CDC officials on the response to coronavirus.

Health officials warned the population most vulnerable to the virus is the elderly.

"The population most heavily impacted by COVID-19 are the elderly, particularly people over 80," said Dr. Jay Butler, deputy director of infectious diseases for the CDC.

Durbin and the CDC are advising people to take precautions, but not panic.
WATCH: How to properly wash your hands
EMBED More News Videos

"Be prepared, don't be scared," Butler said. "Here in Chicago I know sometimes you get tornadoes, blizzards; think through how you prepare for those type of things, and these are frightening events. They are events that sometimes result in injuries and mortality, but panicking in the middle of the tornado is not the way to survive."

Durbin also gave an update on the possibility of a vaccine. He said health officials are saying that could take a year or two.

The third COVID-19 patient in Illinois, a man whose wife was also infected, is in isolation at home and doing well. The state's first two COVID-19 patients have both made a full recovery.

The death toll in the United States has risen to 15 as of Friday afternoon. Fourteen of those deaths have been in Washington state, with an additional death in California.

Concerns about the virus have led to other cancellations in the Chicago area.

Ace Hardware has canceled its spring convention, which was planned for next week here in Chicago.

"The health and safety of our Ace employees, retailers and vendors is and has always been our top priority. Due to growing concerns around the Coronavirus (COVID-19), we have made the difficult decision to cancel the Ace Spring Convention next week in Chicago," company officials said.
Cardinal Blase Cupich, archbishop of Chicago, with a delegation of Jewish and Catholic leaders from Chicago, will reschedule their planned trip to Jerusalem, where the cardinal was scheduled to deliver the 25th annual Joseph Cardinal Bernardin Jerusalem Lecture at Hebrew University on March 16.

"In light of developing concern over the spread of the coronavirus, the State of Israel imposed travel restrictions on persons entering the country from certain countries," a spokesman for the Chicago archdiocese said Friday. "These restrictions affect some members of the delegation, making it impossible for all members to make the trip as planned."

A Chicago gathering for the lecture is being planned.

No sporting events in Chicago have been canceled due to COVID-19, but fans are taking precautions in the large gatherings of people.

The Chicago Bulls and Blackhawks are sticking to their game schedules, and the Big East conference women's basketball tournament will be on the court all weekend at Wintrust Arena, but fans are taking precaution in response to the novel coronavirus.

"The kids are really good. When they were walking out they were all using the hand sanitizer. They know what to do," said Patty Hanner, fan.

Providence College pep band members said their university provided them with information about the virus and how to protect themselves before they flew in from Rhode Island.

"There were people on the plane that were definitely concerned, but for me it just feels like another virus, another thing that is passing,' said Joseph Pekar, Providence College pep band.

United Center officials are monitoring the situation closely, and said they are following CDC guidelines. They have no plans to cancel any events.

"We are happy with the conversations that we have had with our sports medicine doctors and we continue to work closely with them, welcome their input," said Craig Anderson, IHDA executive director.

The winter statement tournaments are taking place as planned. IHSA said there have been no known cases at any schools.

"We are continuing to play the games. We think it is in the best interest of our students to continue to compete," Anderson said.