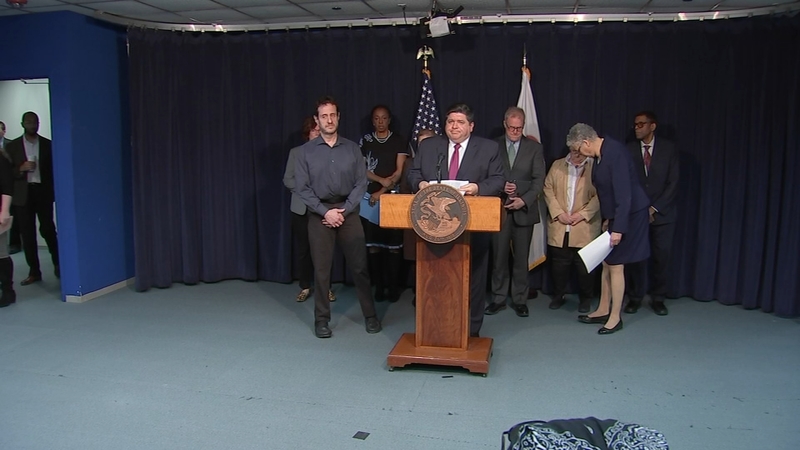 CHICAGO (WLS) -- Four new cases of the novel coronavirus have been identified in Illinois, bringing the total number of confirmed cases to 11.

Arwady said two of the four new cases, a woman in her 50s and a woman in her 70s, are family members of the sixth case of COVID-19 announced by officials Friday. That case involves a woman in her 50s, an employee of Chicago Public Schools at Vaughn Occupational High School, who returned to Illinois after taking a cruise on the Grand Princess.

Arwady said those cases highlight that transmission of COVID-19 appears to require close contact. She said there is no evidence that there has been any transmission at the school related to this case, and so far all testing has returned negative results.

Vaughn was disinfected on Saturday morning and will remain closed until March 18, officials said.

Arwady said the third new case is a woman in her 50s who traveled to Illinois from California. Multiple sources said that woman came to work at Cinespace Film Studios in Chicago.

The fourth new case is a woman in her 70s who returned from an Egyptian cruise that was known to be linked to COVID-19.

All four new patients are in good condition and in self-isolation, Arwady said.

Health officials once again stressed that the virus appears to spread through close, not casual, contact.

"We're not talking about this easy, airborne transmission," said Arwady. "The primary way that this is transmitted is through the droplets when people cough and they sneeze."

Governor Pritzker said he has declared a state of emergency in Illinois, which will open up state and federal resources, including federal disaster aid, to address the spread of COVID-19.

"Our priority is getting ahead and staying ahead in our response, and doing so with the safety of our most vulnerable residents at the core of our preparedness," Pritzker said. "That is why today, in the next phase of our continued effort to stay ahead of these changing circumstances, I am formally announcing a disaster proclamation for Illinois, our version of a state of emergency."

A total of 13 states, including Illinois, have declared disasters or states of emergency.
"To be clear, this declaration will build on an already-robust response that has been developed over many months," the governor added. "We have one of the most robust public health systems in the nation and we were one of the first states to test for COVID-19 because we knew to press for that."


"It's reasonable for people to feel apprehension. I want folks to understand this is going to affect your daily life," the governor said. But he cautioned against panic.

Pritzker said he will now be holding daily briefings in the name of transparency and accuracy, in hopes of keeping Illinoisans informed and prevent the spread of misinformation.

Officials said there are no plans at the moment to cancel any large public gatherings in Chicago, including this weekend's St. Patrick's Day parade. But people over the age of 60 and/or with underlying medical conditions are advised to take precautions, including avoiding large mass gatherings.

Health officials confirmed the state's seventh case over the weekend, which involved a Chicago man in his 60s. They said that may be the state's first case of community spread. Arwady said that the man is a Chicago resident and he's currently hospitalized in serious condition.

Loyola Adaemy in Wilmette is closed Monday and Tuesday after a student came in contact with a confirmed case of COVID-19. Vaughn Occupational HIgh School is closed for two weeks.

Loyola Academy in Wilmette is closed Monday and Tuesday for deep cleaning after school officials said they learned Sunday night that a student and the student's family had contact with someone that tested positive for COVID-19.

Though classes are canceled Tuesday, the boys' basketball game will go on as scheduled Tuesday night, the school said.

An announcement posted on Loyola Academy's webpage said the student exposed was in class through Friday. The student and the student's family are now under a 14-day quarantine and so far, are not showing any symptoms, which means the risk to other students remains low.

However, since the person with a confirmed infection was not physically in the school itself, and the student is not sick, officials are still evaluating what, if any, additional steps are needed.

In Chicago's Portage Park neighborhood, Vaughn Occupational High School is closed until March 18 after one of their employees tested positive for COVID-19.

Victoria Bensen is the parent of a 16-year-old student there.

"We got the call from CPS and my face just dropped. You do go into a panic mode. I think that's a natural human emotion," said Victoria Benson, parent.

Bensen and her family are now being asked to stay at home.

"At this point I'm just, "it is what it is, this is what we're doing.' It's just what everybody's doing. It's a way to protect us," she said. "It seems like they're pretty much calm. It's just life as normal, just that we can't leave the house."

Bensen is fortunate; she can work from home, and because her husband has not been inside the school recently he can go to work. Other parents, however, are facing hardships, which is why State Rep. Lindsey LaPointe's (D-IL 19) office is heading up an effort to gather and distribute donations for those in need.

"This is a school for kids with special needs. So there are additional complications for parents who are stuck at home now," said Chief of Staff Jessica Genova. "A lot of these parents are low income. They do not have the luxury of paid sick days, so there are additional costs involved and this is going to impact them significantly."

Also on Sunday, Amtrak announced that officials in St. Louis County, Missouri, confirmed a new coronavirus case involving a Missouri woman who traveled on a train from Chicago to St. Louis last week.

The person has tested presumptive positive for COVID-19 and is awaiting confirmation by the Centers for Disease Control and Prevention, county officials told Amtrak.

Officials in Missouri said the woman called a hotline and went to the hospital and after being discharged, she was sent home. The woman and her family were ordered to self-quarantine, which officials said her family violated by visiting a school dance.