Coronavirus outbreak: O'Hare conducts health screenings for all flights from China; 11th case confirmed in US 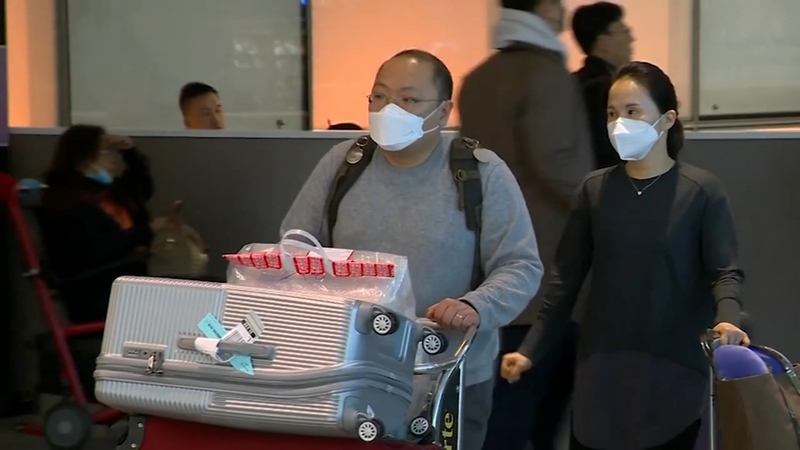 CHICAGO (WLS) -- Chicago's O'Hare International Airport is screening passengers on flights from China for coronavirus Sunday, when the tally of confirmed cases in the U.S. reached 11.

Passengers arriving on a flight from Shanghai said some travelers in China were stopped at the gate.

"Our flight coming back, there were about a hundred people who got denied and our plane was empty," said Joshua Jewell. "We probably had about 50 or 60 on our plane."

The U.S. is blocking foreign nationals who recently traveled to China from entering the country.

"No foreign nationals, non-U.S. citizens, who have had contact with mainland China in the last 14 days will be permitted by the federal government to enter the United States," said Rick Cotton, executive director of the Port Authority of New York and New Jersey.

O'Hare is one of 11 U.S. airports now handling all flights from China. Passengers will undergo enhanced screenings.

"It wasn't too bad. It just took a little longer and also talk to CDC. I think that's good. They basically asked you if you have been to Wuhan," said passenger Kathy Zhu.

United, American and Delta airlines are planning to ground their China flights. Some travelers are scrambling to re-book their flights.

"I had to come early," said Chris Klay.

"We are just lucky enough to get on the last flight to come back," said Layla Jewell.

For Americans who have traveled to the outbreak's epicenter - Hubei province - in the last two weeks, they'll be quarantined for 14 days.

RELATED: What is coronavirus? What US health officials know about outbreak that originated in Wuhan, China
EMBED More News Videos

At a military base in Southern California, Jarred Evans is one of the 195 Americans evacuated from China.

They're making the best of their time on base. Some gathered for a Super Bowl party on Sunday.

The 11th U.S. case of coronavirus was confirmed in California on Sunday, the Centers for Disease Control and Prevention announced.

A husband and wife, both 57 years of age, became sick after the husband recently traveled from Wuhan, China -- the epicenter of the outbreak that began in December. This is the second case of person-to-person transmission in the U.S.

The CDC confirmed the U.S.' first human-to-human transmission of the coronavirus in Chicago, when an infected woman passed it on to her husband. The husband lived with his wife and was exposed to her after she showed symptoms and before she was confirmed to have coronavirus, officials said.
RELATED: Coronavirus: 11th US case of virus from China confirmed in California