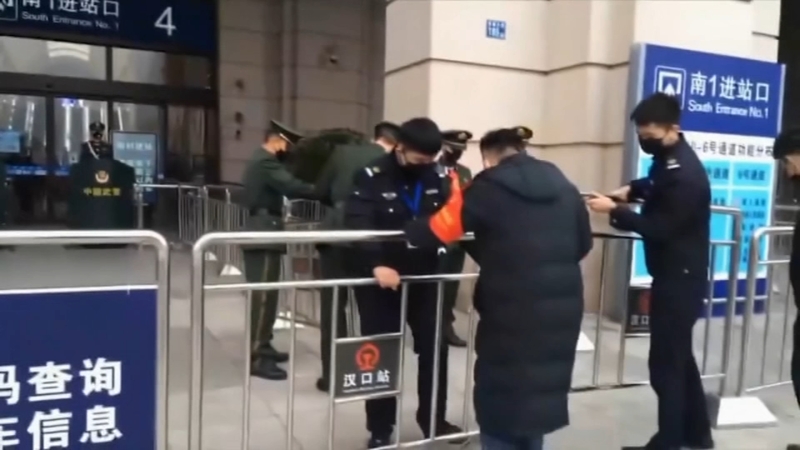 CHICAGO (WLS) -- There is heightened concern in the Chicago area about the spread of coronavirus, and now a second possible case is under investigation in Texas.

The new case involves a student at Texas A&M University. The first domestic case of coronavirus was found in a Washington State man who had recently returned from a trip to Wuhan, China.

So far, at least 25 people have died in China, and more than 830 others have been sickened. But the World Health Organization said it's too early to consider the climbing cases an international public health emergency.

A travel ban is now in place in Wuhan, the epicenter of the outbreak, in an effort to contain the spread of the virus during the Lunar New Year travel rush. The train station and airport are shut down, and ferries, subways and bus service is all halted.

Klarke Wang lives in Chicago, where he works as an architect at his company Variation Design, but he is from Wuhan. He said every member of his family is impacted.

"I feel they are getting nervous, which makes me more nervous," he said.

Wuhan and two other cities are on lockdown, with a total of 18 million people impacted. That's more than the population of Chicago, Los Angeles and New York combined.

In Chicago's Chinatown, there are concerns about family and loved ones.

"Just imagine the Super Bowl going on in China, but it's Chinese New Year and everyone is in a frenzy to travel and connect with their families," said Gene Lee, Chicago Chinatown Special Events.

Those who have loved ones in or traveling to Asia said all travel right now feels risky. Ben Lau, executive director of the Chinese-American Museum of Chicago, said his wife left for Hong Kong two days ago to visit her sick sister.

"Before she went to Hong Kong, I bought her some masks," he said.

Wang did the same.

"I bought 120 masks from Home Depot last night and shipped out on UPS with the highest priority," he said.

Wang would have been on his way to Wuhan now, but his architecture firm recently got a new project.

"I don't know if it's a good thing, bad thing," he said. "Good thing is I don't have to be exposed to the virus. The bad thing is I can't spend this time with my family."

It's a difficult, conflicting time for Wang, who wants to see his family but understands the health crisis needs to end first. He's hopeful he'll be able to travel to Wuhan within the next three months.