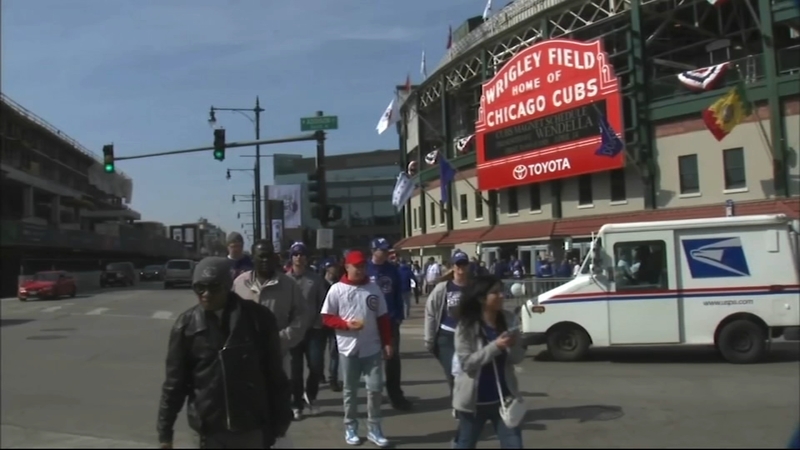 Capacity will be limited to 20% to start the season. Both the White Sox and Cubs played at empty stadiums last year due to the COVID-19 pandemic.

"As a diehard sports fan myself, I'm personally excited to have Chicago take its first, cautious steps toward safely reopening our beloved baseball stadiums to fans this season," said Mayor Lightfoot. "We're able to do that thanks to the commitment of our city's two great baseball franchises who continue to work in close partnership with Chicago's public health officials to find solutions that are not only safe, but offer a path forward toward safely increasing stadium capacity as we move closer into our COVID-19 recovery."

Folks, we've significantly slowed the spread of COVID, getting our positivity rate down to 2.8%. And now, we can begin to safely welcome fans back to our baseball stands on opening day. Although we’re reopening, masking is still of utmost importance. 😷⚾ pic.twitter.com/pkGnMDkSUc

Guaranteed Rate Field normally seats just over 40,000 guest and with 20% capacity, the number of fans is limited to 8,122 with at least six feet of distance between parties. Wrigley Field, which normally has a capacity of 41,374, will be allowed to host 8,274 fans.

"I can only imagine how fired up people in Chicago are gonna be: 8,000 strong on Opening Day. It's gonna give our guys a nice little pull," said Brooks Boyer, White Sox V.P.

The White Sox have been playing spring training games in Arizona with a limited number of fans allowed, and they say it's gone well.

Mayor Lightfoot says some fans can return to the stands for the upcoming baseball season.

The Cubs are also getting a trial run at how to host a smaller number of fans at their Arizona ballpark. They are more than ready to bring fans back into Wrigley field.

"We are tremendously happy to welcome back fans to the Friendly Confines," said Cubs V.P. Julian Green.

Mayor Lightfoot released the news in a tweet this morning, complete with video of her practicing throwing out the first pitch at Guaranteed Rate, and to be balanced to both sides of town, also at Wrigley. The mayor said the plan to allow fans back in to the ballparks starting at 20 percent capacity has been in the works for a while.

"We've spent a lot of time with them going through their plans. I think the plans are very solid," said Mayor Lightfoot.

The news that Chicago ballparks can welcome back fans is a boost for businesses near Wrigley Field and Gauranteed Rate Field.

Fans coming back is good news to the neighborhoods around both ballparks as well.

"It's exciting," said Patrick Corth, manager at Murphy's Bleachers. "It feels like we're starting to see a light at the end of a very long tunnel."

"What an amazing surprise!" said Jen Warren, a bartender at Gallagher Way. "I can't wait to see the energy. I feel it's going to be something new. A whole new layer of excitement."

It's a surprise that can't possibly come to fruition soon enough. Wrigleyville, like everywhere, sat mostly empty for the last year, shuttered by the pandemic. But for a place accustomed to having little room to even move on game days, the 2020 season was particularly dystopian.

"Our patio was always busy, but it was such an odd feeling," said John Patner, an employee at Murphy's Bleachers. "You would hear the sound of the bat and you knew something was going on, but it just wasn't the same environment as it's been."
It was the same feeling of strangeness on the South Side, where Sox fans can't wait to get back in seats. Turtles on 33rd Street is a popular hangout for Sox fans before and after games.

The White Sox and the Cubs will be allowed to have fans in the stands when they start their regular seasons this April.

"Sure, it'll make a difference for business. People are dying to go out," said Turtles manager Lynn Liskiewicz.

Unlike past seasons, unticketed fans won't be able to pack into nearby neighborhood bars for a rowdy overflow scene because, for now, bars are still subject to capacity limits, too.

"Hopefully, along with that, they increase our occupancies at our businesses in the neighborhood, too," the owner of Sluggers said. "We want to get our people back to work and get our customers back in here, partying and having fun like they did before."

COVID safety measures will be in place at both stadiums, including ballpark entry and amenity zones limited contact entry, cashless concessions and retail, additional restrooms per guest, reduced queueing times and reconfigured indoor spaces, the city says. Masks will be required for all fans.