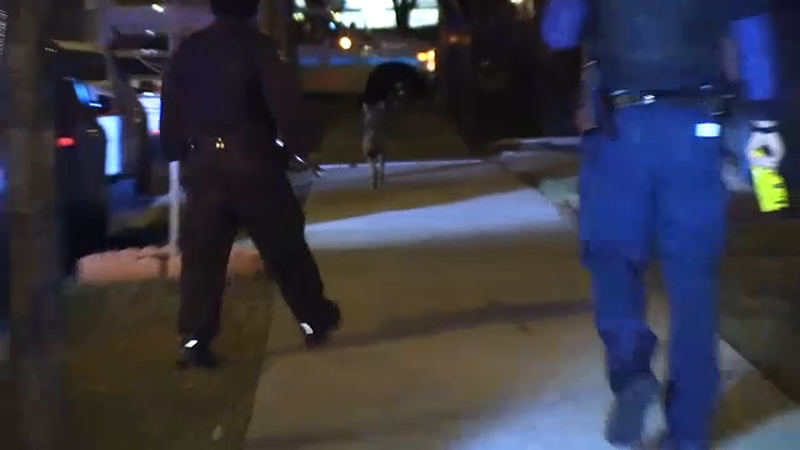 CHICAGO (WLS) -- Two reported coyote attacks on humans in Chicago's North Side could be the first in over a decade, if ever, in the area, Animal Care and Control officials said Thursday.

The latest sightings were around 9 p.m. near Oak and Hudson and then Delaware and Cambridge. Animal Care and Control officers with tranquilizer guns tried to round the animal up. As of 9:30 p.m. it had not been caught.

Nearly half a dozen sightings were called in the same area of the North Side Thursday night. Officials believe there may be two coyotes out and about.

Thursday morning a coyote was spotted roaming outside of Northwestern Hospital in Streeterville near Fairbanks Court and Erie Street. The coyote ran past some of the hospital staff outside, who said it had a limp and an injured paw.

Wednesday night police said a 32-year-old man walked into Northwestern Hospital with an injury, telling doctors he was walking on the sidewalk in the 700-block of North Fairbanks Court when a coyote came from behind and bit him. He was treated for a scratch and released.

Chicago Animal Care and Control officials said they had not been able to speak with him yet.

That attack came on the heels of a coyote attack Wednesday afternoon when a young boy was bitten multiple times by a coyote in Lincoln Park near the Peggy Notebaert Nature Museum.

Police said the boy was walking with a caretaker near Cannon Drive and Fullerton Avenue when he was bitten on the head multiple times.

"Once I got across the street I could see that the kid was bleeding from his head, got down to his face all over his jacket," said Ryan Taylor, Good Samaritan. "He was hurt pretty badly."

Taylor and Dominc Bruce, who are both sophomores at DePaul, said they called for help and flagged down a nearby bus so the boy and his caretaker could find safety. Then they went back for the coyote.

"I called the police immediately, as fast as I could. Dom picked up a branch and started trying to scare away the coyote," Taylor said. "We did anything that we could to try to help this kid out."

"We tried to go up there and chase it away, scare it away, and luckily it ran away without attacking anyone else," Bruce said.

Coyote experts said the reason for the increased sightings is because there is less vegetation in the winter and therefore less places to hide. They have long been a part of life in Chicago and are protected by the state.

"In the urban area, coyotes are intelligent enough to realize we are not a threat to them, so they start to ignore us, so they become more and more visible," said Chris Anchor, wildlife biologist with the Urban Coyote Project.

Gandurski said CACC teams have responded to all recently reported coyote sightings made via 311.

"Generally they do not want any contact with people, so what we want residents to understand is that any attack is very, very rare," Gandurski said. "While this seems unusual, interaction with coyotes, coyotes living in the city is quite common. It's been going on for generations."

Lincoln Park High School was placed on lockdown Thursday morning after a coyote was spotted nearby. The school, at 2001 N. Orchard St., remained on lockdown as crews responded, according to Chicago Public Schools spokeswoman Emily Bolton.

"Earlier today two schools were placed on a temporary soft lockdown following a coyote sighting, which simply restricts students from going outside while Chicago police and Animal Care and Control assessed the situation," a CPS spokesman said Thursday afternoon. "We have been given the all clear to lift the lockdown and the district is in the process of notifying families."

The reports are concerning to some Chicago residents.

"It's crazy, just to know that a coyote was over here, I'm nervous," said Charmin Beckless, who works in the area. "I have to be careful now leaving work, so I'm going to be looking over my shoulder."

"We're in a place you got to always keep an eye out around you and be aware of your surroundings," said Lauren Kleist, a neighbor.

Four to five coyotes were reportedly spotted Wednesday outside of a school near Cleveland Avenue and Division Street. Chicago police were called, and notified Chicago Animal Care and Control.

CACC is assisting Chicago police with the investigation into the attacks and other coyotes spotted in the last week.
The agency posted a warning on social media about coyote sightings in city neighborhoods.

Video sent to ABC7 Eyewitness News by a viewer, who asked to remain anonymous, shows a coyote walking around Old Town early Wednesday morning. The viewer said he saw the coyote chase a woman walking nearby, so he honked his horn to thwart a possible attack.

He said the animal had a limp, just like a coyote seen last week in Lincoln Park and the one seen in Streeterville Thursday.

Alderman Michele Smith recently sent out a warning to 43rd Ward residents after a coyote attacked a small dog in that area as well. Gandurski said it was not clear if the same coyote was responsible for the reported attacks, but CACC wants residents to be cautious.