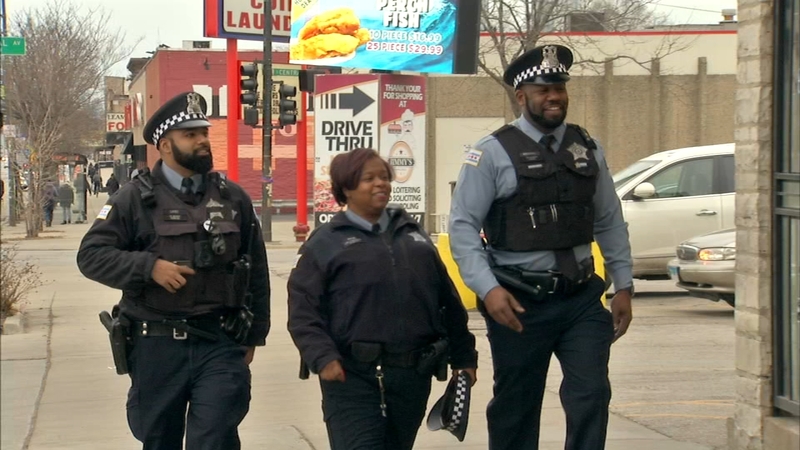 CHICAGO (WLS) -- A new community outreach program is giving Chicago police officers an additional way to help people in the neighborhoods they protect.

The officers engaged in the department's District Coordination Program don't just want to show up when there's a crisis, they want the community to see them as friends and allies.

Pamela Hunter was nearly homeless but now she's settled and happy, thanks to the Chicago Police Department and its latest outreach program.

With the help of veteran 15th District Police Officer Jose Sanchez, the single mother of two boys now has a furnished apartment to live in the Austin neighborhood.

"We all played a role in getting the resources out," Sanchez said.

Officer Antoinette Alcazar said the officers involved in the program are meeting with families in their homes, and encouraging one-on-one conversations.

Modeled after similar initiatives in New York and Los Angeles, the program isn't just another CAPS, the department's community policing initiative. Instead, it looks to change the way cops do police work.

On Thursday, long-time Officer Jamay Nellum-Fane, along with Officers Malcolm Brooks and Steve Sabu, are walking the neighborhood.

DCOs, as they're called, aren't required to respond to radio calls, but instead give out their cell numbers to residents who call or text them directly. CPD said the officers field on average about 10 calls or texts a day.

The program started in January of last year in the 25th District on the city's West Side. It was just expanded to the neighboring 15th District.

Each district usually has 10 officers assigned in pairs to a designated sector.

"So what happens is that actually draws calls away from OEMC and draws them directly to our cellphones so that we have a lot more personal interaction with people," Officer Darryl Baety said.

"The reason this is so effective is they're showing a different side," said Martin Aguiano of BUILD, Inc. "No, they are not the perception you had of them."

While some said the effort is all too good to be true, Pamela Hunter expressed appreciation.

"I look back and I see the people that actually helped me and these officers that went through so much, probably even their off-time trying to help me and my kids find somewhere to go," Hunter said. "I really appreciate it."

Police officials said crime is down in the 25th District and citywide, but they stop short of linking the drop to the program.