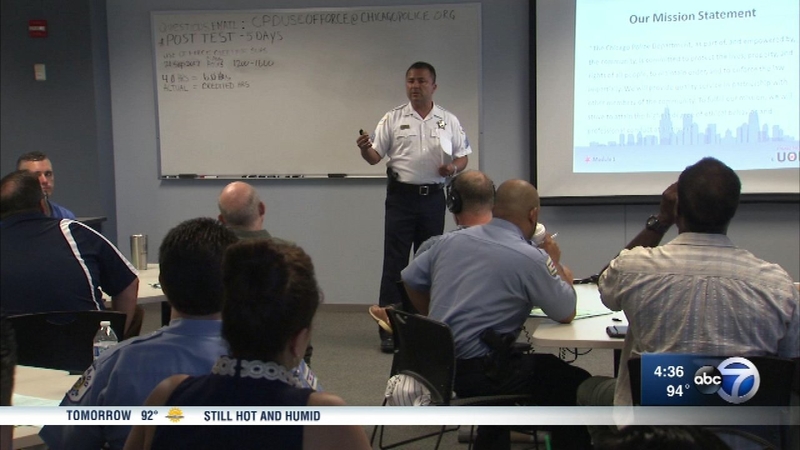 CHICAGO (WLS) -- A new training regimen for Chicago police officers is the next step in an effort to overhaul the CPD's use of force on city streets, the department announced Thursday morning.

Police will give the media a chance to go through the new training program later on Thursday.

In the last year, the CPD has been evaluating and evolving its use-of-force policy. Police announced Thursday most officers have been through the first phase of this training and will have completed it by Oct. 15, when the new policy is scheduled to go into effect.

The department developed a new use-of-force policy after several high-profile cases, in which officers actions were criticized and in some cases, led to officers facing criminal charges.

The training will increase over the next four years. By 2021, all officers will be required to have 40 hours of training each year, which will focus on de-escalation and managing stress. It will teach officers to use force when it's "reasonable or proportional." When this new policy was announced, Chicago Police Superintendent Eddie Johnson said it will also call on officers to report others who violate the policy.

"I came on 32 years ago, in 1986. We had training in the academy, the basics. Then we kind of piece-meal training together as it was needed, as we went along. This is going to give the training to the officers on the important policy changes that they need to know about - among other things - and will give them the confidence to go on the street, to react and act in the proper way," Navarro said.

The updated policy comes after several high profiles cases in which the officers use of deadly force was questioned, most notably the Laquan McDonald shooting by a Chicago Police Officer. That officer was charged with murder.

Thursday, reporters were invited to participate in one of the four hour training sessions.

Officers watched video of real situations outside of Chicago, wrote down impressions, actions at several stages of the scene, then discussed options and opportunities to de-escalate and adhere to the department's new priority sanctity of life.

"Sanctity of life influences our decision if we have to use force, to use it safely," said Chicago Police Sergeant Mark Lemus, a use of force trainer.

ABC7 was asked to not record the officers' interactions during the training, so the officers would be comfortable and the experience would be effective.

From what ABC7 observed the officers, were attentive and engaged, and officer safety was paramount in their minds.

"Your decision to either advance or escalate or deescalate or change your position is just in a split second that you have to decide that," Lemus said.