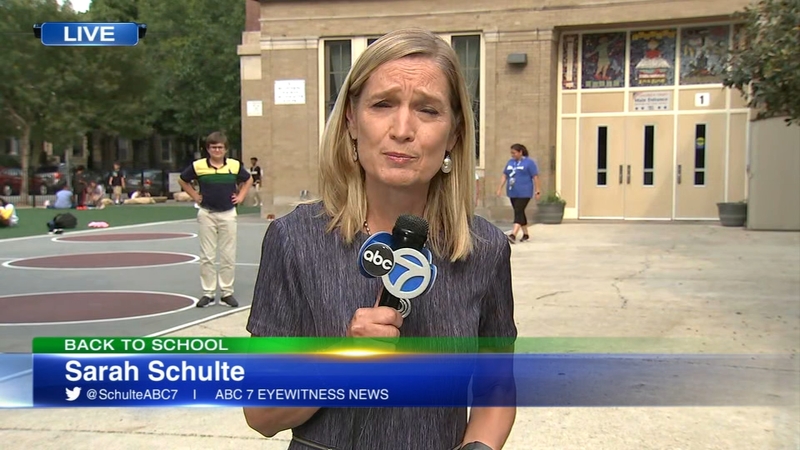 CHICAGO (WLS) -- The first day of school is in the books for Chicago Public School students, but there's still the threat of a possible teachers' strike.

In honor of the first day of school Tuesday, Mayor Lori Lightfoot and CPS CEO Janice Jackson rung the school bell and cut the ribbon for the very first time at the new Englewood STEM High School, welcoming 400 new students.

The new $85 million state-of-the-art high school features multipurpose educational spaces, garage-door style classrooms, a new library, a modern outdoor sports facility and a health center to be used by both students and the surrounding community.

Four neighborhood schools closed to make room for this one, its sits on the former campus of Robeson High School. Some parents said they were reluctant at first, but are now truly thrilled with the type of education this school can provide.

"It's very improved," said parent Alana White. "I'm pretty much happy and hopefully the teachers are as good as the school looks."

Until now, 90% of Englewood students attended schools outside the neighborhood.

"(My son's) choice of school before this one was St. Lawrence and that's a catholic school. He was not going to any other neighborhood school," said parent Kieosha Ross.

To alleviate some concerns, free shuttle buses are available to students who live in West Englewood.

Mayor Lightfoot, toured the school, joined by CPS CEO Janice Jackson. They acknowledge there has been a lack of quality school options in this neighborhood, and Englewood STEM is a step in the right direction.

"Giving all of you, all of the students, an opportunity to get college credit or an associate's degree before you even get your high school diploma," Lightfoot said.

100 Men from across the Chicago area were invited to welcome the students back to class at Richard J. Daley Academy.

Englewood STEM will add a new class each year until 2022 when they will have a full 9th through 12th grade slate.

This first day of school begins as CPS teachers are preparing for a strike. The teachers rejected the city's offer last week of a five-year deal that would give them a 16 percent pay hike.

"We do not know what is going to take place, but I'm keeping my teachers focused on students first," said Richard J. Daley Academy Principal Kamilah Hampton.

Mayor Lightfoot remains confident that a strike can be avoided.

"I really do think that we have all the tools that we need and an offer on the table to be able to get the deal done," Lightfoot said. "Despite the rhetoric in the public, at the bargaining table we are definitely making progress and we will continue to do everything we can."

Chicago Public School students are back in school and beyond the first day of class, a possible teachers strike looms.

CTU held a press conference Tuesday morning saying they are committed to negotiations.

"While the state of Illinois, the legislature, has put almost $1 billion a year of new revenue into the district, into the funds, the coffers of Chicago Public Schools, we have not yet seen a contract which guarantees the funds will come into the front lines and into the schools the way we need," said CTU President Jesse Sharkey.

Parents are also anxious for a deal; they did not want to think about a possible strike on the first day of school.

"I just hope it all works out, and the adults figure it out, and kids can continue to come to school smiling," said parent Oliver Williams.

"Hopefully it will all pass and all work out, I'm crossing my fingers," said parent Christine Fajardo.

Sharkey said the earliest strike authorization vote would be at the end of September; until then, several bargaining sessions are scheduled.

Chicago-area elementary and high school students can ride city buses and trains for free on the first day of school, thanks to the "First Day, Free Rides" program.