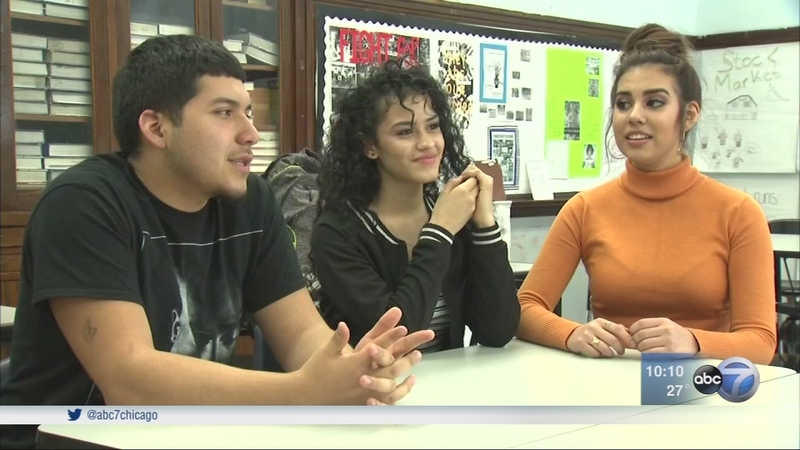 The students from Lake View High School wrote that of all the celebrities from Chicago, Chance it he one who really gives back.

"All of the things that you do for our city never go unnoticed. All of the free concerts you host and all the time you spend here in the city really show you care. We notice it. We look up to you because the fame usually takes humility away from artists, but it hasn't' changed you. ... You're more than just an artist to us, you are a way of life," the students wrote in part.

The open letter was published on Billboard.com.

"He is so self-made and it's inspiring," said Annelisse Betancourt, 10th grade.

"We're living kind of the same things he has, like, he knows what our struggles are. It's a different admiration," said Alondra Cerros, 10th grade.

"If it was for chance nobody would be doing that right now," said Alex Rojas, 11th grade.

Alondra, Annelisse and Alex personally penned the letter to the Grammy winning artist to tell the Chicago-raised star just that.
Their history teacher encouraged the group of friends to thank him.

"It was a huge boost for CPS student," Stephanie Barajas said - both a financial boost and a remind that someone who once sat where they are cares.

Chance replied on Twitter, writing, "I appreciate you guys, and you'll be happy to know the work has only just started. Huge things to come over the next 2weeks."

I appreciate you guys, and you'll be happy to know the work has only just started. Huge things to come over the next 2weeks. https://t.co/tplZMMW9DS

The Chicago native and CPS graduate, real name Chancellor Bennett, announced his donation on March 6, three days after a Friday meeting with Illinois Governor Bruce Rauner to discuss CPS funding. Chance called that meeting "vague" and "unsuccessful" before announcing his $1 million donation and calling on others to do the same.