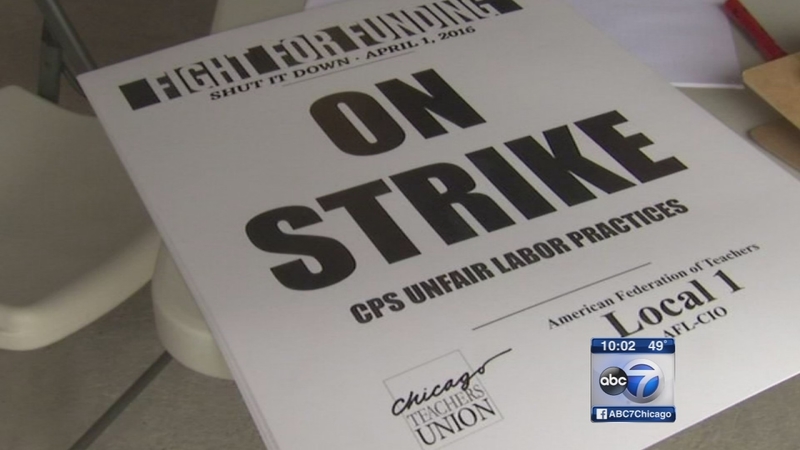 CHICAGO (WLS) -- With Chicago Public School teachers set to hit the picket lines at 6:30 a.m. Friday morning, the district says it is ready to help parents find a place for their kids to go. Thousands of members of other unions will join the more than 30,000 teachers for the daylong protests.

To prepare for the strike, CPS has a contingency plan in place with 107 schools, some library branches and park district sites where parents can take their children Friday. CPS said parents do not have to register their children ahead of time, and each site will keep children safe, fed and engaged. The CTA is also offering free rides for CPS kids.
EMBED More News Videos

Thousands of Chicago teachers plan to walk off the job Friday for a one-day strike.

CPS is facing a $1.1 billion budget deficit. As contract talks between the teachers and CPS continue, the union knows the district needs revenue before an agreement is reached. So, teachers hope closing down the schools will get Springfield to finally listen.

"I don't want to walk away from my kids for a day, but it demonstrates a sense of urgency that our union and teachers have for revenue," CPS teacher Erika Woznika said.

Many of their students are behind their teachers, but they also worry about missing valuable class time.

"I especially feel bad for the teachers because they won't be getting any pay," said Heriberto Hernandez, a Jones College Prep sophomore.

"We have AP testing coming up in May, and APs don't change the date! So our curriculum keeps on going," said Cain Yepez, a Jones College Prep sophomore.

Pushing for revenue is the message the Chicago Teachers Union is aiming for with its one-day strike. Originally, the focus was on pension contributions that CPS says it would no longer pay for, but the focus shifted after CPS decided against it.

Now, the April 1 action has evolved into a labor-led fight for Springfield to fund education and other social services.

"It's a whole bunch of groups coming together, not just unions, but it's also community organizations and people who are providing services for the most vulnerable," Chicago Teachers Union President Karen Lewis said.

CPS officials and Mayor Rahm Emanuel said the message can still be achieved without walking off the job. CPS said it is encouraging teachers to cross picket lines and show up to work. If they don't, they will not be penalized - but they will also not get paid.

"We are extremely disappointed that 340,000 children are being deprived of their education tomorrow. I think we also need to make it clear that it's time to end the gamesmanship," CPS CEO Forrest Claypool said.

"The mayor took it out on public kids last week, right? That was a furlough day, they closed schools for that. They didn't make any contingency plans," Lewis said.

As CTU prepares for their day of action, former CPS school board president and former chairman of the Illinois State Board of Ed Gery Chico calls the strike a cry for help. He says mass pickets and protests may the key to getting Springfield to listen.

"The Illinois constitution says that the state bears the primary responsibility for funding our schools and that is not happening," Chico said.

Thousands of union members plan to converge on the Thompson Center for a rally and march in downtown Chicago during the Friday evening rush hour.

Claypool called the strike "illegal" and said the district is reviewing legal options and plans to take action with the Illinois Educational Labor Relations Board. Claypool said CPS could announce that action on Friday.
EMBED More News Videos

None of the suburban residents interviewed by ABC7 supported spending any more of their state tax dollars on the Chicago Public Schools.

SUBURBAN RESIDENTS SOUND OFF ON STRIKE

There wasn't much sympathy for the Chicago Teachers Union or the Chicago Public Schools in general during an unscientific survey Thursday afternoon in the western suburbs.

None of the suburban residents interviewed by ABC7 supported spending any more of their state tax dollars on the Chicago Public Schools.

"The teachers union is not willing to compromise. I think that their benefit packages are too lavish," said Tom Edwards, of Downers Grove.

CPS claims says its students receive only 73 percent of the state education dollars allocated to the suburbs and downstate public school children.

The State Board of Education reports 42 low income suburban and downstate districts in similar fiscal straits as Chicago. Ralph Martire of the Center for Tax and Budget Accountability says Illinois should depend less on property taxes and more on income and sales taxes to fund education.

But suburban resident Edwards say when it comes to CPS, it's not only a matter of how the tax dollars are generated.

"The funds in the Chicago Public Schools have been mismanaged for a long time and I think that to ask people in the suburbs and downstate to bail them out of their poor decision-making is just not right," he said.

While CPS and the teachers union appear to agree on a need for increased state aid, Claypool and the district strongly oppose the CTU plan to strike Friday.

CTU Vice President Jesse Sharkey and CPS CEO Forrest Claypool joined ABC7 News This Morning on Thursday to talk about the views of each side.