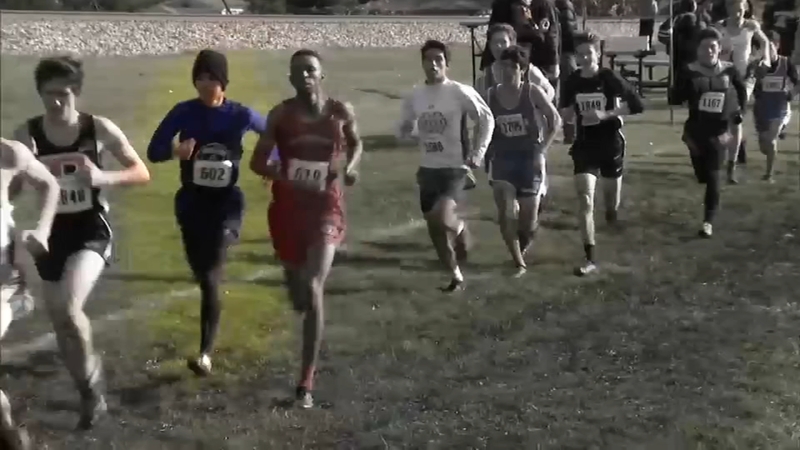 CHICAGO (WLS) -- The consequences of the CTU teachers strike last month have been a roller coaster ride for many Chicago Public School athletes.

Despite a judge's ruling last week allowing the students to compete in the state sectionals, a new court filing could prevent CPS cross-country runners from competing in the state track meet this weekend.

The latest development comes after the athletes already missing regionals due to the teachers strike.

For seniors, like Tony Delira from Alcott College Prep, it would be their last chance to qualify for the state meet.

"It does concern me a lot 'cuz I'm trying to go downstate and set a new personal record," Delira said.

For Delira, who has autism and is also a talented runner, this opportunity is possibly the culmination of his athletic career. With his 13th place overall finish at sectionals, he qualified for state.

The only problem now is that the IHSA's court appeal might prevent him from going.

In a statement IHSA said, "removing the CPS runners and team who qualified....is not the goal of this appeal but is a potential outcome."

"Imagine if you're a teenage kid, excited, and you don't know if you get to run in one of the biggest events of your life," Pepsico Showdown Founder, Joe Trost said.

Organizers of an alternative cross country meet, intended to replace the state meet for city school athletes, have decided to go on with their plans later this week. They said there are about 1,100 athletes signed up so far.

"People were asking us [if we] are gonna cancel," said Chris Wilhite with Dick Pond Athletics. "This is for the entire city."

Meanwhile, runners like Delira who qualified for the meet downstate Saturday will save themselves for that race. They are keeping out hope that the judge denies the appeal and lets them run.

"That's what's disappointing here," Trost said, "is there are adults who didn't step up to do the right thing for the kids."

The IHSA said they have to appeal the ruling that allowed the cross country runners to compete last weekend because it creates a legal precedent that could cause problems down the line upholding the rules they put in place.

The judge has about five days to make a ruling.

"The IHSA has filed an appeal seeking to dissolve the Temporary Restraining Order entered by the Honorable Neil H. Cohen on November 1 that allowed CPS runners to compete in the State Series Sectionals on November 2 and beyond. Removing the CPS runners and team who qualified for the IHSA Cross Country State Finals as a result of the Temporary Restraining Order is not the goal of this appeal, but is a potential outcome. There are clear IHSA rules in place that prevent teams from participating while on strike, and rules that require participation and qualification in preliminary rounds to advance in our State Series tournaments. Because the court's order allowed the CPS participants to circumvent those rules, we believe this ruling creates a dangerous legal precedent that hampers our ability to uphold the rules put into place by our member schools, and has far-reaching implications that impact the finality and integrity of any IHSA event. We cannot anticipate when the appeal will be determined and will follow the timeline set by the court."

The IHSA has already approved 19 CPS football teams to compete in playoffs.

"The Illinois High School Association will conduct its IHSA Boys & Girls Cross Country Sectionals as planned on November 2, and will include all runners impacted by the Chicago Public Schools strike per the Temporary Restraining Order granted this evening by the Honorable Neil H. Cohen. The CPS teams will compete at the Sectional site correlated with their Regional. We prepped our Sectional hosts for this potential outcome this afternoon, and have been working this evening to get them the information necessary to expand their meets. We will have meaningful discussion with our Board of Directors, staff, and legal representation throughout the weekend as we determine our next steps."
Report a correction or typo
Related topics:
sportschicagoloopnear south siderunningchicago public schoolshigh school sportsstrikelawsuit
Copyright © 2022 WLS-TV. All Rights Reserved.
TOP STORIES
5G launch could wreak havoc on airplanes, airline CEOs warn
Woman shot, killed while looking for parking at work in Chicago Lawn
Police search for hit-and-run driver who killed mother of 3
Tonga volcano eruption shock waves detected in Chicago
Chicago's south suburbs to get new area code Friday
Rapper Vic Mensa arrested at DC airport for alleged drug posession
Woman killed after being pushed in front of NYC subway train
Show More
Aurora Mayor Richard Irvin announces run for IL governor
What is the Black church's role in today's social justice movement
Chicago sports broadcaster Les Grobstein dies at 69
Oakbrook Center 911 calls released: 'Somebody's shooting the mall up'
Cop who bungled homicide case involving Daley's nephew promoted
More TOP STORIES News