Honoring 314 killed in Chicago this year, Crosses For Losses founder builds memorials for each victim 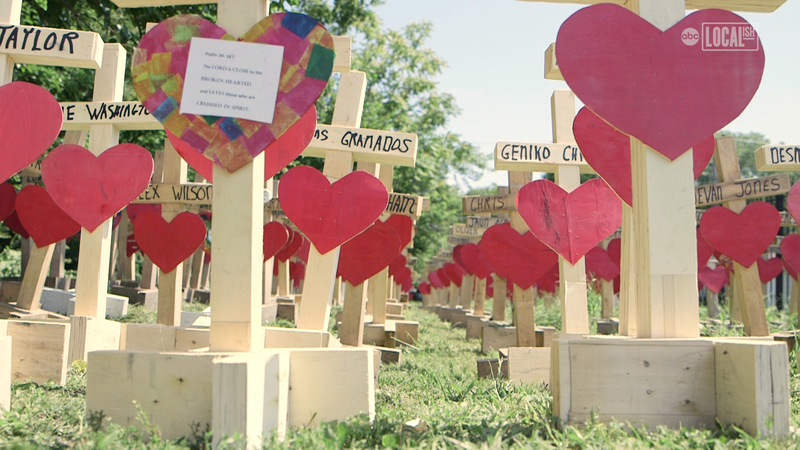 Honoring 314 killed in Chicago this year, Crosses For Losses founder builds memorials for each victim

CHICAGO (WLS) -- Greg Zanis, founder of Crosses for Losses, builds memorials for every murder victim in the city of Chicago - and travels the nation after mass shootings and disasters to do the same. So far he's built nearly 27,000.

"One of the things that's really missing is love," Zanis said. "I'm not a church guy. I'm not a gun issues guy. I just want people to be remembered."

This morning, Zanis updated a collection of crosses on a lot he owns in Englewood to reflect the number of victims in Chicago this year: 314.

He's always careful to confirm the victim's religion before constructing his memorial. Stars of David for Jews, crescents for muslims, ribbons for atheists, and more.

"I've never gotten it wrong, Zanis said, stressing the importance of religious awareness. "Can you imagine how insulted people would be if I did?"

Victim advocate Dawn Valenti has worked with Zanis since he built a cross after the E2 nightclub stamped tragedy in YEAR - when she found a cross for her best friend's son.

"They (the memorials) mean a lot, because it's really a place for them to come and memorialize their loved one," Valenti said.

Zanis plans to keep building memorials as long as he can, although he goes into debt to pay for his travel and relies on GoFundMe pages when his debt gets overwhelming.