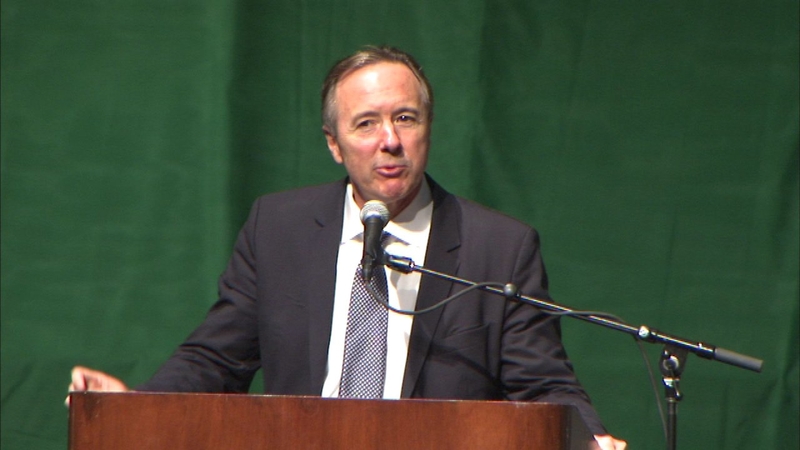 "You may have heard yesterday that the governor called our schools prisons. He thinks. He doesn't know. He's ignorant. He doesn't know," Claypool told a crowd of hundreds of Safe Passage workers at Chicago State University.

On Monday, Rauner said of Chicago Public Schools: "Many of them are basically, almost crumbling prisons. They are not a place that a young person should be educated."

Claypool rebutted: "He's obviously a very smart man and we would like to help educate him by showing him what's going on in our schools."

CPS claims its test scores and graduation rate are on the upswing.

However, Rauner doubled down on his comments while in Bloomington on Tuesday, insisting that some older CPS schools -- with their emphasis on security -- do look like prisons:

"They have metal on the windows. They're dark, they're depressing. They're crumbling. They have metal detectors at every door and they have police officers and security officers everywhere," Rauner said.

Still unable to reach budget agreement with the Democrat-controlled General Assembly, Rauner wants a special appropriation bill for K-12 public schools without any extraordinary help for the nearly bankrupt CPS.

Rauner's education secretary said the measure would guarantee Illinois schools can open in the fall.

"If this bill is passed, the schools will open on time," Beth Purvis, Illinois Secretary of State. "It will ensure that the good work going on across our state continues."

But Claypool has said without any state money, CPS cannot open in August and under the governor's proposed plan would have to cut nearly 30% at CPS, which is predominantly black and Latino.

"At the root of the fiscal crisis is the fact that this state discriminates against children of color and children living in poverty," Claypool said.

Claypool also said the governor is defending what he calls an unfair system used to fund education.