CRYSTAL LAKE, Ill. (WLS) -- For more than a year, some homeowners have been battling the new bleachers at Crystal Lake South High School.

Homeowners say the bleachers are too large and were built without a permit.

The bleachers at the center of a battle between a high school and its neighbors were put to use Friday night, as Crystal Lake hosted South Elgin in their first home football game of the year.

The structure towers over the back yard of Jeff Gurba's house, where the steel bleachers rise 48 feet into the air. They block the morning sun and during football games, there are crowds of people just a few feet away.

"There's always been a certain amount of noise, and just right there, you can hear that. It's so much louder than the old bleachers," said Gurba.

Eyewitness News decided to test the noise level with a decibel meter. During a down time in the game they played music that peaked at 94 decibels in the back yard. 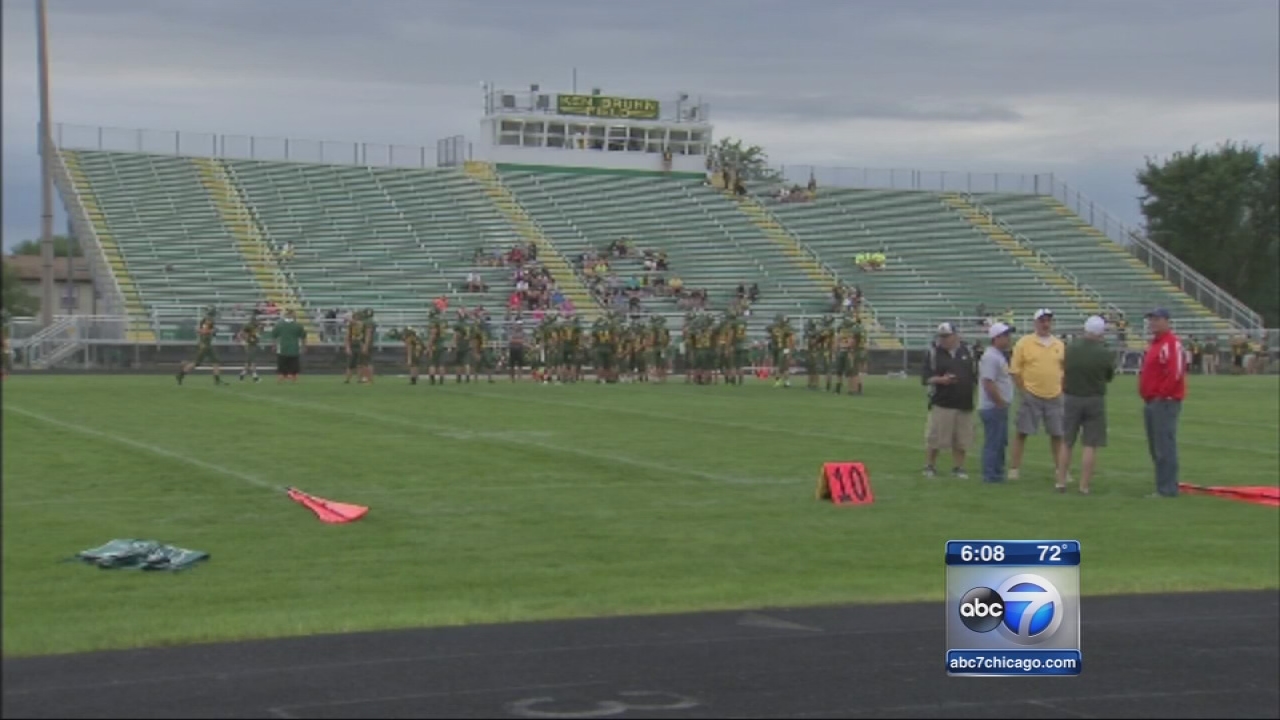 The game could be one of the last where fans can cheer on the Gators from the home team bleachers as a judge sided with nearby homeowners who say the larger bleachers don't meet the city's code.

"Seems like one delay after another, we're very happy with the judge's decision," said Kim Maselbas, the suit's plaintiff.

Maselbas and McHenry County States Attorney Louis Bianchi are among the property owners behind the stadium along Amberwood Drive who filed a lawsuit in 2013 against Community High School District 155.

"No one on Earth would move next to this coliseum that's now in our backyard," Bianchi said.

The ruling follows an appellate court decision upholding a judge's prior determination that the district should have first gone through the city's zoning process before constructing its $1.8 million bleachers.

"We thought a year ago that they would go through the zoning process, and that's the process they should have followed," said Tom Burney, the plaintiff's attorney.

The issue arose last year after the district replaced the old visitors' bleachers with much larger home bleachers that do not conform to residential zoning for the site.

The school built the new stands a year ago, without getting permits and allegedly bypassing city codes. Neighbors say these bleachers are nearly three times the size of the old ones. The courts so far have agreed with their contention the school bypassed the residential zoning laws when they built the structure. School district attorneys have argued they were within their rights to build the bleachers on their property.

"There's a specific process that runs through the regional superintendent that governs the construction of schools, and there's never been a court decision ruling that a municipal zoning process either supplements or takes the place of that," said Robert Swain, the school district's attorney.

The decision doesn't necessarily mean that the bleachers will have to be torn down. But zoning officials could require the school to reduce their size or face fines.

"We're hopeful that not only will it cause the school district here to comply with the zoning ordinances, but that the same thing happens in other communities," said Justin Hansen, city attorney.