CHICAGO (WLS) -- The CTA broke ground Monday on a $240 million renovation at the Red Line's 95th Street/Dan Ryan Station on Chicago's South Side.

In attendance: the mayor, a senator, a congressman, a governor and a bunch of aldermen.

Built in 1969, more than 20,000 public transit riders use the 95th Street rail and bus station each weekday, according to the Chicago Transit Authority. The new station will better accommodate the crowds, and look more like an airport terminal than a CTA train stop.

"And I think it will have a sense of openness and safety that the current terminal struggles to achieve on a daily basis," CTA Chief Infrastructure Officer Chris Bushell said.

Renderings released by the Office of the Mayor show a station enclosed in glass with a bright, open-air concept that triples the square footage by adding more walking space for passengers, an expanded bus terminal and an improved Red Line train platform. There will also be more elevators and escalators, and Chicago artist Theaster Gates will finish the interior after construction.

Modernizing the end-of-the-line 95 th Street Station is a prelude to extending the Red Line train south to 130th. That plan involves running trains in the median of I-57 for a bit, then they'd turn south and run alongside existing Union Pacific track to 130th. That project would cost billions and displace more than 100 homes, but would also add four new station stops to an area traditionally reliant on buses for mass transit.

"There's a great demand for fast, efficient rail services. We want that for every resident of the city," Claypool said.

The extension to 130th is still years and many dollars away, but mass transit money is flowing. Just look at the Red Line rebuild, Blue Line upgrades, and the new 95th station project.

Emanuel said the project will create more than 700 construction jobs.

The terminal will remain open for the duration of construction, which is expected to be complete in 2016. Details on the project can be found http://www.transitchicago.com/95thTerminal/ 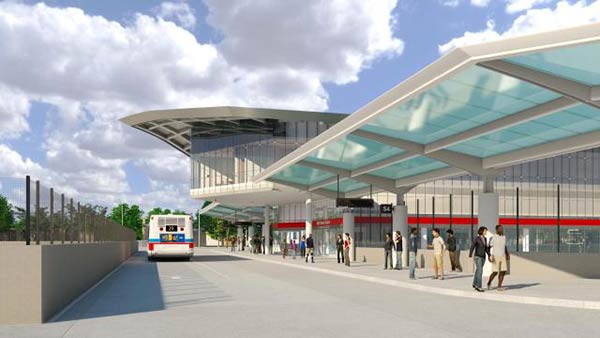