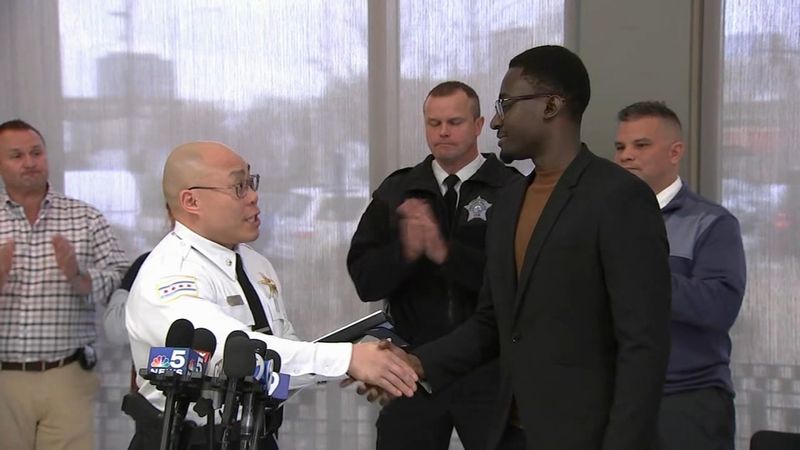 CTA Blue Line shooting: Witness gets award for help in investigation of man shot near UIC-Halsted station on West Side, Chicago police say

CHICAGO (WLS) -- Chicago police are honoring a witness who helped a shooting victim on the CTA Blue Line last month.

Police invited Jonathan Kasongo to the 12th District station Thursday to award him for his help catching a suspect in the Feb. 5 shooting near the UIC-Halsted station.

Patrick Waldon, 31, is facing charges for allegedly shooting a 30-year-old man in the back after attempting to rob him on a Blue Line train, according to police.

Police said Waldon shot the victim during a struggle over his backpack.

A man has been charged in the shooting of another man on a CTA Blue Line train Wednesday morning near the UIC-Halsted station on the Near West Side.

Kasongo called police and stayed with the victim to make sure he was alright, officers said Thursday.

"I tried to make him more calm. I was telling him that everything was going to be OK," Kasongo said. "I asked him his name, and I was happy because he couldn't breathe anymore, he was like, 'I can't breathe, I can't breathe.' And a few seconds later, the ambulance was there."

Police also said investigators were able to catch the suspect because of the description Kasongo gave them.