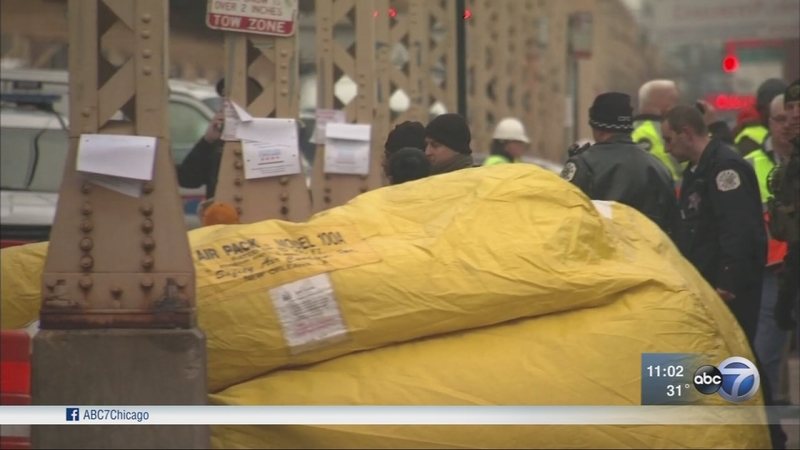 Man to be evaluated after CTA standoff

CHICAGO (WLS) -- A man who refused to come down from the CTA tracks near the Morgan station shut down service for parts of the Green and Pink lines for more than five hours Tuesday morning. Thousands of commuters were impacted.

Police received a report around 2:30 a.m. of a man seen running on the Green Line tracks near Lake Street and North Damen Avenue in Chicago's West Town neighborhood. When officers arrived, they cut off electricity to the tracks.

The man then walked back and forth between North California Avenue and North Morgan Street, eventually stopping near Lake and North Carpenter Street.

The man made his way to the ledge and was seen hanging from the Pink Line tracks near the Morgan station.

Police negotiators and a SWAT team spent hours trying to get him to come down safely. He refused, so investigators inflated a large air bag below the tracks in case the man jumped.

Around 7:30 a.m., he jumped down onto the airbag and was taken into custody for a psychological evaluation. No one was hurt.

"I was kind of surprised, but this kind of thing happens two or three times a year anyway. I'm just glad he's OK," said Pat O'Brien, a CTA rider.

"Actually, my friend texted me this morning and said, 'If you're going to take the Green or Pink Line, try to find another way to get to work,'" said Sapena Mulchandani, another CTA rider.

Green Line service was stopped in both directions between Pulaski and Clark/Lake. Shuttle buses were made available for morning commuters. Pink Line trains were operating only to Polk, then connected with the Blue Line at Racine.

"The shuttles were back-to-back. It's like 1,000 people on the California stop, but the shuttles kept running. So nothing got backed up," said Linda Curtis, a CTA commuter.