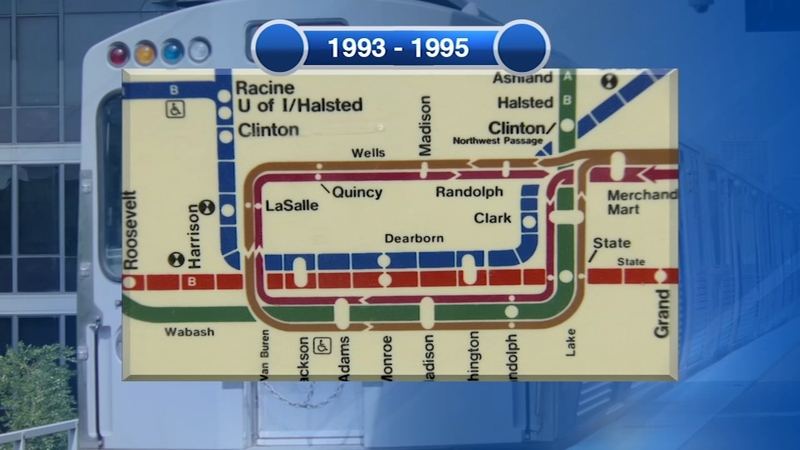 CHICAGO (WLS) -- This is a very special week for us, as our morning show celebrates its 30th anniversary on April 3.

Roz, who was here when it started, has put together a four-part series on covering transportation over 30 years, and how much has changed! Roz joins us now with her first report on the CTA.

Part one in the series is on the CTA. When Roz started reporting on public transit in 1989, a one-way fare was $1.00, train lines had names instead of colors and no buses were accessible. A lot has changed over 30 years!

It's one of the most recognizable scenes characterizing Chicago. We met with CTA historian Graham Garfield to see how much has evolved over three decades.

"Clark-Lake was a major project and it took two completely separate stations, the elevated and subway stations were originally independent, unconnected facilities and reconstructed them to one major hub," Garfield said.

The new color-coded rail line system was created at this time and the A/B skip-stops were phased out. The much-anticipated Orange Line opened, now giving the city direct access to both major airports.

The mid-90s brought a complete reconstruction of the Green Line, the oldest in the system, with sections dating back to 1892. Dozens of stations were also being rehabbed or completely rebuilt, including Washington/Wells, Morgan, Cermak/McCormick Place, Washing/Wabash and most recently 95th Street. Speaking of the Red Line, the south branch got a complete overhaul in 2013.

How we paid to ride the CTA was also changing.

"It began with cash and tokens and flash passes, then in the 1990's moved to magnetic striped fare cards," Garfield said.

Which ultimately led to smart cards and today's Ventra system.

The 2000s brought the opening of the Pink Line, and with increased ridership, a major expansion project on the Brown Line.

On the bus side, not only was the look changing, by 2005 the entire fleet was accessible for riders with disabilities.

Technology is bringing improvements from cell service in the subway to digital screens in trains and stations. CTA says it's the high-tech advances that will advance the rider experience into the next 30 years.