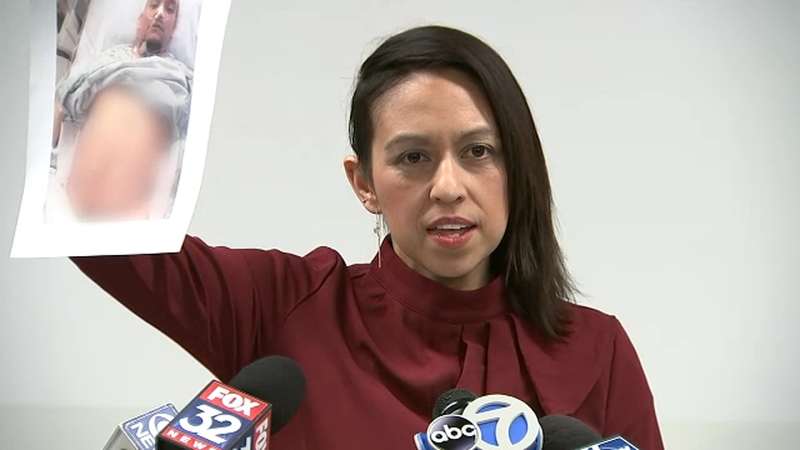 CHICAGO (WLS) -- A man who was shot by Chicago police at a CTA Red Line station has filed a lawsuit claiming he was unarmed and that the officers involved went too far.

Holding a picture of her client in his hospital bed, attorneys for 33-year-old Ariel Roman filed a lawsuit on his behalf against the city, the cop that shot him and her partner. It alleges the officers used excessive force during an incident in the Grand subway station further violate a court ordered consent decree outlining police reform.

"Mr. Roman never struck, hit, punched, attacked an officer," said Gregory Kulis, one of his attorneys. "All he kept saying is "What did I do? Let me go. I didn't do anything.'"

Lawyers filed the 13-page lawsuit Wednesday in federal court following the February 28 incident at the Grand Avenue station of the CTA Red Line.

"It's very easy to criticize him and say you just should have put your hands up," said Gloria Schmidt Rodriguez, an attorney for Roman. "Well, he did put his hand up and he got shot."

The shooting happened the same day Mayor Lori Lightfoot announced more officers would be assigned to public transportation following a spike in crime on the CTA.

The lawsuit says an unarmed Roman, who his attorneys say suffers from anxiety, had walked from one subway car to another - a city ordinance violation - before police Tased, pepper sprayed and shot him in the stomach and lower back. Cellphone video recorded by a bystander captured the shooting.

"We thank God that there was a citizen bystander who had the presence of mind to capture the video of that incident on that Red Line station on that day, because without that video, we wouldn't be here today," said Andrew Stroth, an attorney for Roman.