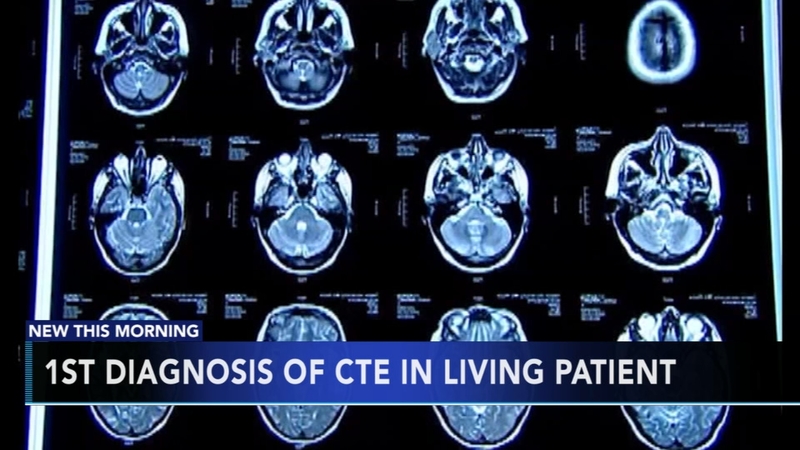 CHICAGO -- Researchers in Chicago report that they have detected evidence of chronic traumatic encephalopathy, more commonly known as CTE, in a living patient for the first time.

Currently, CTE, a degenerative brain disease found in those with a history of repetitive brain trauma, can only be formally diagnosed after an autopsy. But a new study indicates researchers may be one step closer to being able to diagnose the disease while a patient is still alive by detecting deposits of tau proteins.

Scans performed on 14 retired NFL players while they were still alive indicated the presence of tau, a type of protein that clumps up over neural cells that have been damaged, according to a study published in the Journal of Neurosurgery. The protein slowly spreads throughout the brain, killing brain cells, according to the Concussion Legacy Foundation.

When one of the former players died, doctors were able to determine whether the "distinctive CTE pattern" that resulted in his scan actually indicated the presence of the disease.

Once the man's brain was examined after his death, doctors made the official CTE diagnosis, according to the study.

The man was 59 when his brain was scanned, according to the study. Two years later, at age 61, the man's wife noticed that he had been experiencing progressive motor deficits, such as the inability to button his shirts, zip his pants or tie his shoes. Eventually, he was no longer able to feed himself. He had also developed muscle twitching in his arms and decreased muscle mass in his shoulders and arms, the study states, and in addition to what doctors presumed was CTE he also suffered from amyotrophic lateral sclerosis, often called ALS or Lou Gehrig's Disease.

In the final months of his life, the man was admitted to a nursing home for dehydration, failure to thrive, progressive dysphagia, incontinence, progressive neck and limb weakness, and slurred speech, according to the study.

The man began playing football at 11 years old and continued until he retired from the league at 33, which placed his "cumulative lifetime risk exposure" at 22 years, according to the study.

While more research is needed to corroborate the result of the exam, the ability to identify CTE in the brain of a living patient is the first step toward understanding the development of the disease and developing a cure, the researchers said.

The findings from the study also confirmed that a "fingerprint" signature of CTE that was previously reported exists, according to the study.

One of the researchers, Julian Bailes, M.D., director of neurosurgery and co-director of NorthShore University HealthSystem Neurological Institute, told ABC News that his team was "pleased " with the study.

"The importance of this one today is that this is the first time to have a scan which shows brain degeneration of CTE in a living person and then to have that person die and it correlates with the autopsy," Bailes said, adding it's the first such case to his knowledge.

"We realize and always want to acknowledge that this is only one and more work needs to be done to verify the correlation," he said, adding that for now the team is "very, very pleased."