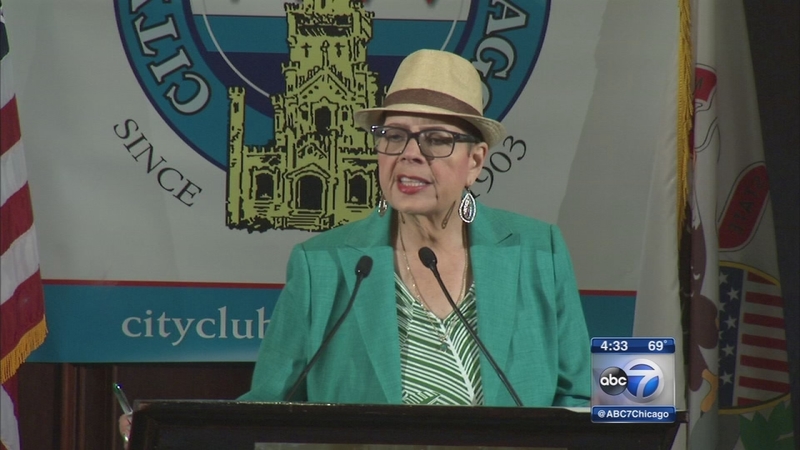 CHICAGO (WLS) -- As educators marched in Springfield Wednesday for a graduated income tax to generate revenue for public education and human services, CTU president Karen Lewis had some harsh words for Illinois Gov. Bruce Rauner and his leadership.

Calling it a "day of action," hundreds of CTU members were among more than 1,000 demonstrators who crowded the Capitol rotunda Wednesday. Most represented school districts and social services agencies stressed by the state's budget crisis.

"What's not being done for any of these groups this impacts our children. Not just the education issue," said Cathaline Carter, Chicago Teachers Union.

As they marched to the governor's mansion to continue the demonstration, more than 200 miles away, Lewis likened Gov. Rauner to an "ISIS recruit" in her remarks at the City Club in Chicago.

"If Governor Rauner says he loves Illinois, yet he hates labor, he is a liar! There is no Illinois without labor, and to fleece the one is to rob the other," Lewis said. "I've been reading in the news lately about all of these ISIS recruits popping up all over the place. Has Homeland Security checked this man out yet? Because the things he's doing looks like acts of terror on poor and working class people."

In a statement, Rauner wrote: "This kind of rhetoric has no place in American public discourse and sets a terrible example for our kids."

"It doesn't do anybody any good. We need to come down and talk in reasonable terms and not in terms of terrorists," said State Rep. David Harris, R-Mt. Prospect.

During session, the House rejected Speaker Mike Madigan's bill to put a constitutional amendment on the November ballot to tax millionaires.

Still under consideration is a separate measure to replace Illinois' flat tax with a progressive tax that charges higher rates for higher incomes.

"To reduce taxes for 99 percent of people and bring in $1.9 billion, we think that is the right approach to take for the income tax change," said Emily Miller, Voices for Illinois Children.

"The answer is not raising taxes. Raising taxes will drive companies, it will drive small businesses and more people out of the state," said State Rep. David McSweeney, R-Cary.

The progressive tax bill will be taken up in committee Thursday morning.

The head of Chicago Public Schools is asking the teachers union president to resolve contract disputes through arbitration to avoid a strike.

Schools CEO Forrest Claypool wrote a letter to Chicago Teachers Union President Karen Lewis on Wednesday seeking a response by April 27. In a statement, a CTU spokeswoman called the request a "publicity stunt."

"We have hundreds of members in Springfield right now fighting for revenue," the statement said. "CTU does not have binding interest arbitration because we choose to negotiate and write our own contracts---plus police and fire, as he referenced, cannot strike. We can't say we're interested in this until we know the rules of arbitration and under what terms."

Over the weekend, the union rejected the recommendation of a neutral arbitrator that it accept a district contract offer. Lewis said that the "clock has started" on a potential strike which could begin as early as May.

CPS officials say the district is in dire financial shape. Claypool says that CTU should agree to final and binding arbitration in lieu of a strike as police and firefighters have done.