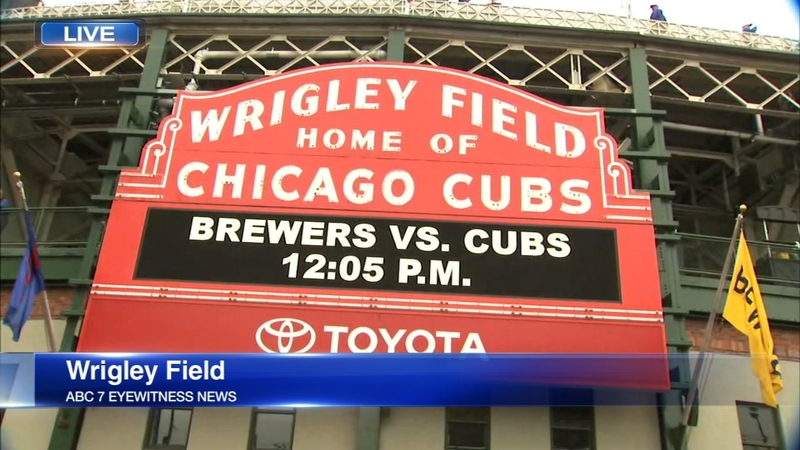 CHICAGO (WLS) -- The Chicago Cubs will face the Colorado Rockies in the NL Wild Card game Tuesday night at Wrigley Field for a chance to make into the National League Division Series playoffs.

The Cubs lost to the Milwaukee Brewers 3-1 during a tiebreaker game at Wrigley Field Monday afternoon.

The Chicago Cubs will face the Colorado Rockies in the NL Wild Card game on Tuesday night at Wrigley Field.

The team will play the Rockies who lost their tiebreaker game against the LA Dodgers.

The Brewers have a break until the start of the NLDS playoffs on Thursday. They have home field advantage during NLDS.

A day watching baseball, even when the Cubs lose, is still better than a day at work for most people.

One mom and her son skipped work and school for the rare opportunity to see the Cubs play the 163rd game of the regular season.

When asked if he was feeling well, Charlie Ticknor said no. But he said he's felt good enough to be at a Cubs game.

"Yeah, I'm not feeling well either. I emailed my boss and said I wasn't going to make it," said Anne Elkhart, Charlie's mother.

It was a good day to have the Blue flu if you were a Cubs fan.

The team even provided an excuse letter to your boss or principal. Just fill in the blanks. Renee Foley said she sent it to her boss. And did he buy it?

The Cubs provided some excitement for fans when they tied the game early. They were celebrating at Murphy's Bleachers.

But today was not the day, as the Brewers came back strong. Cubs fans left the ballpark quietly knowing the road to another possible World Series will have to start with the Wild Card game. But most are still hopeful.

"We'll get 'em tomorrow. We'll get maybe the Dodgers or the Rockies. I ain't worried about it, we'll get 'em," said Cubs fan Deja Kendall.

Before the game started, the feeling around the ballpark Monday was electric.

"Hopefully it'll be a win also. Besides a huge game, I want it to be a win. We have faith in our Cubs," said Cubs fan Rene Lozano.

Dennis Conto left Grand Rapids, Michigan, at 2:30 a.m. to get to Wrigley Field so he could get in line for tickets after the Cubs beat St. Louis Sunday.

"For all of you Cardinals fans and to the one that told me that the acronym for Cubs is completely useless by September, we need to talk in an alley buddy," said Cubs fan Dennis Conto.

With the National League Central title up for grabs, a lot is on the line as the Cubs continue to re-write their history.

"This is the fourth consecutive year that we're going to the post season more than any other year in baseball in Cubs history this is quite historic," said Cubs Spokesperson Julian Green.

The Cubs tweeted out a letter for you to give to work, excusing you from duty so you can cheer on the team.

One super fan texted his boss this morning so he could go to the Monday game.

Milwaukee Brewers fans are also hoping for a win Monday.

A lot of Milwaukee Brewers fans made the trip down to Chicago and also fired up for the game. They are of course wearing their Brewers gear and cheese head hats in Cubbie territory.

Brewers fans said the trains were packed this morning and, of course, they were also scrambling to get tickets to today's game.

"We got on last night, online last night. We had three computers going and an iPad and one phone trying to get tickets and we got our three tickets and obviously able to get off today and here we are," said Brewers fan Laurie Weber.

But Cubs fans are optimistic about Flying the W.

No matter what the outcome of the game is today, the Cubs will still get a spot in the playoffs, but Central Division champs certainly has a familiar ring to it.