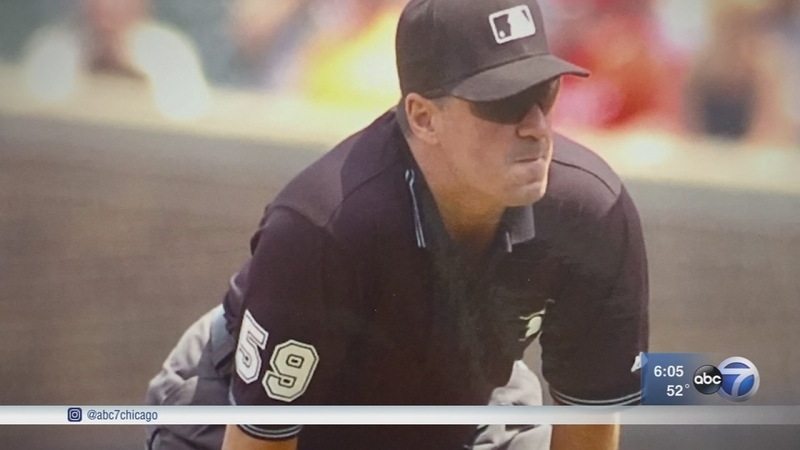 ROSELLE, Ill. (WLS) -- Tony Randazzo, who was born in Chicago and graduated from Lake Park High School in northwest suburban Roselle, will be part of the umpiring crew for the World Series.

"Tony called me up. He was crying. He had me crying and said, "Dad, I made the World Series," his father said.

Randazzo has been a Major League Baseball umpire for 17 years. This will be his first World Series. Until now, the 2012 All-Star Game is still one of his career highlights. It's a path Randazzo came to after an injury abruptly ended his college baseball dreams.

"In his first year he tore up his shoulder. He loved the game of baseball. He went to work at an auto dealership and just was not happy," his father said.

George Randazzo, who also happens to be the founder of the Italian American Sports Hall of Fame, encouraged his son to go to umpire school. The rest is history.

Rarely seen on screen, the decisions umpires make aren't always popular with fans, unless of course, you think they can get you tickets to a World Series game.

"I got a million friends now all of a sudden. You know what, I'm watching the game on TV tonight," Randazzo said.

And while George Randazzo stayed back for games one and two, he will be there at Wrigley Field on Friday to hopefully watch his son ump during a World Series game.

Hirschbeck crew chief at Series, Vanover has plate in opener

John Hirschbeck will be the umpire crew chief for the World Series and Larry Vanover will call balls and strikes for Game 1.

Joe West, in his record 39th straight year in the majors, and Sam Holbrook also are on the crew.

Holbrook will be the replay official for the first two games, then switch places with Vanover. Todd Tichenor will assist in the replay room.

This will be the sixth World Series for West and fifth for Hirschbeck, including three as crew chief. Holbrook is working his second Series.