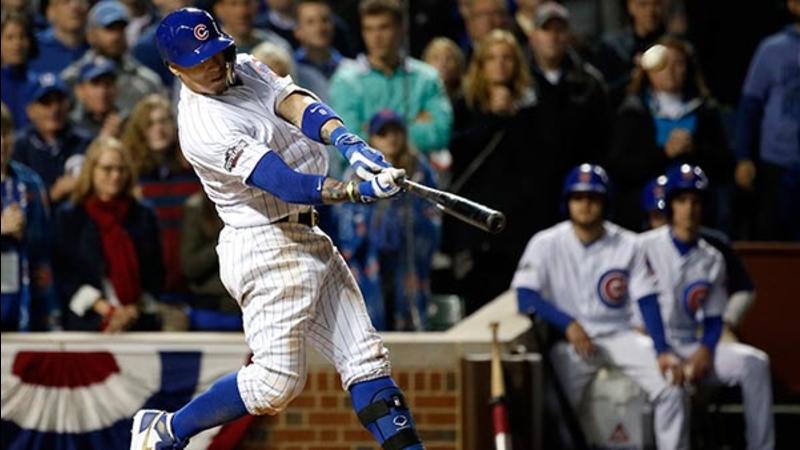 A positive playoff opener for a city draped in "W'' flags and hoping for a historic championship.

Lester outpitched Johnny Cueto with eight sparkling innings, Baez homered in the eighth and Chicago beat the San Francisco Giants 1-0 in a tense Game 1 of their NL Division Series on Friday night.

Lester retired his last 13 batters in a dominant performance, but the game was scoreless when Baez sent a towering drive into a stiff wind. With a raucous crowd of 42,148 and every player anxiously tracking the flight of the ball, left fielder Angel Pagan ran out of room as it landed in the basket that tops the ivy-covered walls at Wrigley Field.

Baez thought it was surely gone as soon as the ball left the bat.

"I forgot about the wind," he said. "The wind's blowing straight in, and I hit it really good. Good thing it just barely went."

Chicago's relievers in the bullpen in foul territory down the left-field line broke into cheers as Baez rounded the bases with the delirious crowd in a frenzy. Baez then came out of the dugout for a curtain call.

"Just waiting for him to make a mistake and he finally did," Baez said.

Chapman allowed Buster Posey's two-out double off the ivy in the ninth before Hunter Pence bounced to second for the final out, wrapping a bow on Chicago's first meaningful game in weeks.

Lester's $155 million, six-year deal in December 2014 was a key moment in the Cubs' turnaround from also-ran to contender. They clinched the NL Central title on Sept. 15 and led the majors with 103 wins this year, but have their sights set on the franchise's first World Series crown since 1908.

"I kind of figured as we got going it would come down to one mistake and luckily we didn't make one and they did," Lester said. "And I think that's just kind of the beginning of the series."

Cueto was outstanding, following up Madison Bumgarner's four-hitter in San Francisco's wild-card win at New York with his own gem. The right-hander, deftly varying his delivery to keep the Cubs off balance, struck out 10 and allowed three hits in his second straight complete game in the postseason.

"We both were pitching a great ballgame and obviously we knew - we were aware that one run was going to decide the game," Cueto said through a translator.

Baez's homer stopped San Francisco's postseason scoreless streak at 23 innings dating to the World Series in 2014. The Giants also won it all in 2010 and 2012, leading to talk of even-year magic for manager Bruce Bochy's club, but it was the Cubs with the good fortune in the series opener, a strange turn of events for the usually snake-bitten franchise.

The Giants had at least one hit in each of the first four innings, including leadoff singles in the first three, but Lester held them off each time. The left-hander got some help from his usual catcher, with David Ross throwing out Gorkys Hernandez trying to steal second in the first and picking off wild-card hero Conor Gillaspie at first in the third.

San Francisco had runners on second and third after left fielder Ben Zobrist misplayed Pagan's sinking liner into a fourth-inning double, but Brandon Crawford bounced out to end the inning.

"We had a couple chances there. We just couldn't get the key hit," Bochy said.

Cueto retired his first 10 batters and had the Cubs shaking their heads all night long. He also got some timely help from his defense.

Hernandez got revenge on Ross with an outstanding, sliding catch on the warning track in left-center in the third. Kelby Tomlinson, starting at second in place of Joe Panik with the lefty Lester on the mound, robbed Zobrist of a two-out RBI single in the fourth, then took a hit away from Anthony Rizzo with another diving stop in the seventh.

Actor and comedian Bill Murray was in the crowd cheering on his beloved Cubs. He did his best to bust the team's infamous curse, wearing a shirt that read: "I Ain't Afraid of No Goat."

Rocker Eddie Vedder, Chicago Bulls stars Dwyane Wade and Jimmy Butler and Chicago Blackhawks defenseman Brent Seabrook each got a loud cheer when they were shown on the videoboard in left field. Wearing a white Kris Bryant jersey, former Chicago Bears coach Mike Ditka fired up the crowd before the first pitch.

"It's time to play ball," he said while standing in front of the home dugout. "Go Cubs Go!"

Giants: Jeff Samardzija gets the ball in Game 2 for his first postseason start in the same place he began his major league career. The right-hander was drafted by the Cubs in 2006 and spent his first 6 1/2 seasons with the team before he was traded to Oakland in the 2014 deal that brought shortstop Addison Russell to the Cubs.

Cubs: Coming off a breakout season, Kyle Hendricks makes his third career playoff start. The right-hander went 16-8 with a major league-best 2.13 ERA this year. He was nearly unhittable at home, going 9-2 with a 1.32 ERA in 15 games.

There were rumors President Barack Obama, who is in Chicago for fundraisers this weekend, might attend Friday night's game, but they seemed to be dashed when he opted for dinner in the West Loop with foundation supporters instead.

The president, who is in town through Sunday when he will appear at a Tammy Duckworth campaign event, is heavily rumored to be attending game two at Wrigley Field on Saturday.

If the president does decide to attend a game, it would make already-extensive parking bans and street closures worse thanks to the heightened security.

CLICK HERE to find out more about how to avoid ticket scams, street closures and parking restrictions

Minutes before the first pitch, a jammed ballpark rocked with anticipation and emotion. One woman and her family were celebrating their son's 17th birthday, but he was not in attendance. A Cubs fan, he succumbed to a sudden heart attack in this historic summer.

"We lost him this summer to sudden cardiac arrest. He's a huge Cubs fan. Today would be his 17th birthday, so we're here for our son," his mother said.

And for some families, like many hoping tonight marks a new set of memory making, a heck of a first Cubs game to attend.

"This is my first Cubs game," said Jaden Marshfield.

Earlier, fans flocked from all over to take in the first playoff game.

Shelly Robinson flew in from Bakersfield, Calif., to watch her beloved Cubs play. She grew up on the West Coast but has a sentimental reason to be a Cubs fan.

"My husband proposed to me [at Wrigley Field], so yes, we are," she said.

One fan, already in town for a Kanye West concert, was happy to see his Giants as the first hurdle the Cubs need to navigate.

"I'm a Giants fan, so I've had some people come up to talk to me, seen some Giants fans, but Wrigley fans, Cubs fans have been super nice to me," said Brett Mayekawa.

Jerome Mapp of Boisie, Ida., checked out the new postseason merchandise at Sports World, including shirts that say "Made for October" and "2016 Division Champions."

Wrigley Field looms large in Chicago's legends for many non-natives, especially because of how many movies have lit up the screen with scenes of Wrigley.

The championship chase is on and that reminds Chicagoans how many movies have lit up the screen with scenes of Wrigley Field.

The bars around Wrigley started filling up several hours before first pitch. Everyone had a sense of history and anticipation, and those providing the hospitality have been preparing for this moment. In an already high-profile area of the city, the partially-refurbished Wrigley Field is ready to play its part.

"We've done this, we've had many, we had the Michael Jordan years, we had the Blackhawks, we've had a couple of Cubs runs, and we've never had a problem and we hope to everything goes that way today," said Steven Strauss, bar owner.

Beer is as much a part of baseball as anything. Inventory has been stocked and service in plastic to keep fans and the neighborhood safe is a top priority.

"The only problem with the streets being closed, a lot of the trucks can't get in to the community, but we hope we'll be ready for more orders next Monday," said Strauss.

If you're going to drink, you're going to need a bite to eat as well and plenty of places are serving up the Cubs-themed goodies. If you like your snacks with a side of superstition, the Old Crow Smokehouse had a goat on a spit Friday morning.

"Every year we do it, the Cubs keep getting better. This Opening Day, we did two goats - and you see how phenomenal? Usually this time of the year I wouldn't do this again. But some wise guy walked a goat down Clark Street. We're back to square one. We'd better do this again. Get rid of that bad juju out there," said Tony Scruggs, executive chef, Old Crow Smokehouse.

Giordano's is offering a special #FlytheW pizza. The stuffed pizza features a "W" made out of parmesan cheese. It will be available at select Giordano's locations in Chicago starting Friday.

For dessert, the team asked West Town Bakery to come up with a unique #FlytheW cake. The 10-inch cake took about two hours to make and costs about $200.

Goddess and the Grocer also created Cubs-themed treats: the goddess victory cake, victory cupcakes and victory cake pops. A portion of the proceeds will be donated to the Anthony Rizzo Family Foundation, which raises money for cancer research and provides support to children and families fighting the disease.

Clark the Cub passed out #FlytheW flags and cards earlier this week, to encourage Cubs fans to show how excited they are for the playoffs. Here are some of ABC7's favorite posts:

Clark the Cub passing out ?Fly the W? flags and cards earlier this week, to encourage Cubs fans to show how excited they are for the playoffs.