Cubs to ask to work 24/7 on Wrigley Field renovations 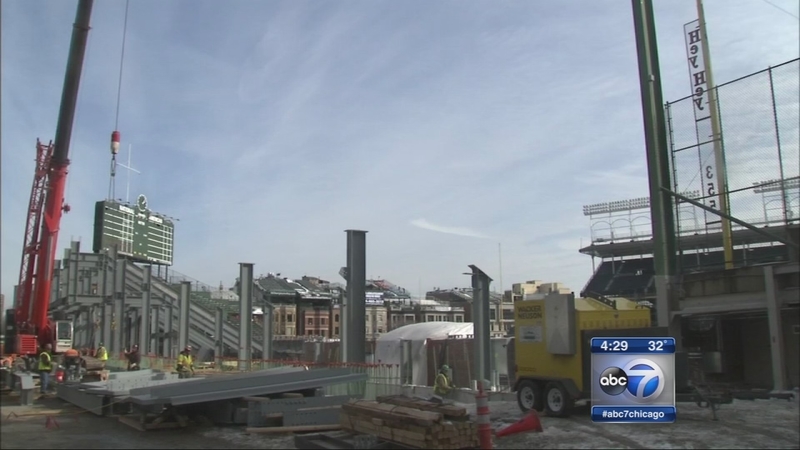 CHICAGO (WLS) -- The Wrigley Field renovation project is so far behind schedule there will be about 5,000 fewer seats for next month's home opener and the right-field bleachers won't be open until June.

Now, the Cubs say they will be asking the city for permission to work 24/7 during these next few weeks.

The request for around-the-clock construction caught many Wrigleyville residents off guard. And even if it's approved, it still won't be enough to get the entire ballpark ready for Opening Day.

"We were hopeful for a warm winter, we did not get that," said Crane Kenney, Cubs president of baseball operations.

The Cubs' curse extends even to construction. The team revealed during a media tour the left and center field bleachers won't be open until a month after Opening Day and the seats in right field won't be finished until June.

Extreme cold prevented workers from installing steel beams on five of the last nine days. It's why the team now wants city approval to work around the clock Thursdays, Fridays and Saturdays.

"We're going to try to focus it around the times that it's busy here anyway. Thursday, Friday and Saturday nights, which if you've been to this area, it's an active area, but we'll try to focus on these times to be sympathetic to our neighbors," Kenney said.

"If they didn't know about Chicago winters, it's because they never lived in Chicago," said Charlotte Newfeld, a Lakeview resident.

Charlotte Newfeld has been battling ballpark expansion since the 1970's. Why, she wonders, should the Cubs be allowed to break rules every other builder must obey?

"Not at night! There are lots of residents around. Why couldn't we have ownership that understands they should be part of a neighborhood and not trying to build a company town," Newfeld said.

Cubs execs say they know they'll need the blessing from the local alderman before they can work at night. The alderman has not responded to ABC7's request for comment, and the city says the Cubs have not yet made the request to work around the clock.

The rest of the construction is coming along on schedule, including the plaza, where a new hotel and clubhouse will eventually go up, to the left field concourse, where literally all of the beams have been replaced.

Additional concessions and amenities are being added there, but fans will have share the space with ongoing construction work during at least part of the season. This is just one phase of four that are being planned to bring the ballpark into the future.