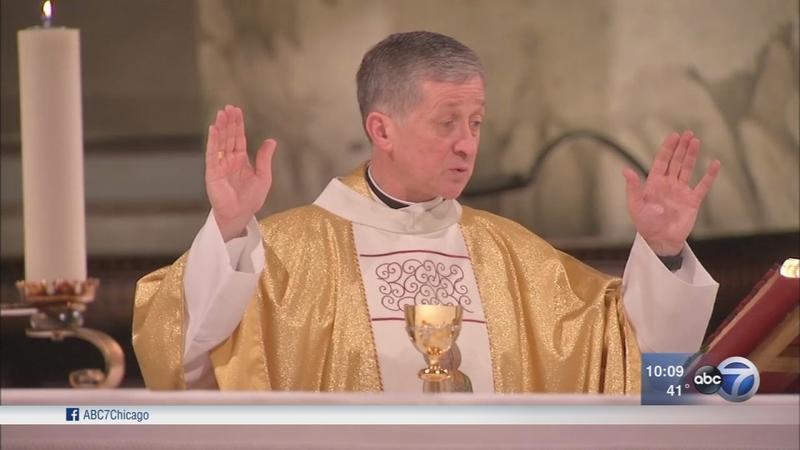 ROME (WLS) -- With hours to go before his elevation to cardinal, Blase Cupich is pleading for peace in the streets of Chicago.

"In terms of violence in our cities and the feeling of being disenfranchised on the part of a lot of people. We can do better and I'm confident that if we work together we will," Cupich said.

It's not just words but actions seen by Chicago area leaders who have come to Italy to honor the man of faith.

"I know this personally, he prays for it every day. And the good news is he not only prays for it - he puts his work towards it, and the work of the church and its effort. Peace there and understanding, it would go a long way in making sure that we reduce the violence," said Chicago Mayor Rahm Emanuel.

"That's one of the many reasons I love cardinal-elect Cupich. He is very active in the community, not just in a religious sense, but in a very practical sense," said Illinois Governor Bruce Rauner.

Blase Cupich's new title of cardinal places him in the elite group of consultors closest to Pope Francis.

As a cardinal, Archbishop Cupich's words will carry an even greater weight. Cupich, as well as a delegation of friends, family, parishioners and politicians, is in Rome to be elevated from archbishop to cardinal at the Vatican on Saturday.

"I think that any time in a moment like this in the life of the church, you are a higher profile person because of being in the College of Cardinals. It can add to that voice, but my hope would be that anything I would say could be received on its own merits," Cupich said.

His new title of cardinal places him in the elite group of consultors closest to Pope Francis. It's no surprise that the pope who chose him for Chicago now wants him in this prominent role.

"I think it absolutely makes a difference. I think it says a lot about Pope Francis's confidence in Archbishop Cupich and the message he has been bringing," said Fr. Bill Lies, vice president of the University of Notre Dame.

"He just has a special way. He's charming, he's friendly, he's outgoing and he makes you want to be a part of this archdiocese and it's a very special place now," said Bill Farley, Chicago pilgrim.

With his new title comes a practical question: What do we call him? Eminence? Blase Cardinal Cupich? Cardinal Blase Cupich?

"As they did with archbishop they'll refer to me as cardinal. That's fine. Especially, I'm going to insist on my family doing that," he said.

On Friday, Cupich led the Chicagoans who've joined him in Italy to the small town of Assisi, outside Rome.

On Friday, Cupich led the Chicagoans who've joined him in Italy to the small town of Assisi, outside Rome. This town has special significance for the archbishop on what just happens to be the second anniversary of his becoming the archbishop of Chicago.

"Of course we planned that day two years ago anticipating that you'd all be here today," Cupich said.

"This is really Archbishop Cupich's great dream that we have a pilgrimage to Rome and very particularly he wanted to come to Assisi. And part of it is his own dream about Chicago," said Fr. Jack Wall, Catholic Extension President.

In a mass held above the tomb of St. Francis, Cupich called for people to come together especially following the divisive presidential election.

"Unity - we need that in society. Right now we've divided into blue or red states, into liberals or conservatives," he said in his homily.

Eight centuries ago in Assisi, St. Francis prayed for peace. It's a pleading that would likely still resonate among many Chicagoans now.

"I think it's an opportunity to look at how a city can function in a peaceful way for the common good," Cupich said. "That is what my prayer was today here at Assisi as we prayed for Chicago."

"Whether you were a Democrat or Republican or whomever, it was a very difficult time. So I hope, for me, it brings it back to a sense of peace and order," said Shelley Farley, Chicago pilgrim.

"And there's really no better place to bring that home than here in Assisi. It gives you the opportunity to listen to how a city can function together for the common good," Cupich said in a news conference.

Back in Rome, even the tensions between leading Illinois Democrats and Republicans may have mellowed just a bit over spoonfuls of cool gelato.

"We've got the mayor and his wife Amy who are good friends, President Cullterton and his wife Pam who I love, they're here and we visited a little bit. Comptroller-elect Mendoza is here with her husband. I don't know them yet but this is a wonderful opportunity," said Gov. Bruce Rauner.

Who knew gelato had such an effect?

"We'll be in church, they'll see our new cardinal being named by a great pope, and I'm hopeful that that common experience together creates the friendships and the relationships that you can call upon later as you deal with other things," said Mayor Rahm Emanuel.

Saturday is the main event of this trip: it's the consistory at St. Peter's Basilica at the Vatican. Archbishop Cupich will kneel before Pope Francis and receive a red hat, becoming Chicago's new cardinal.