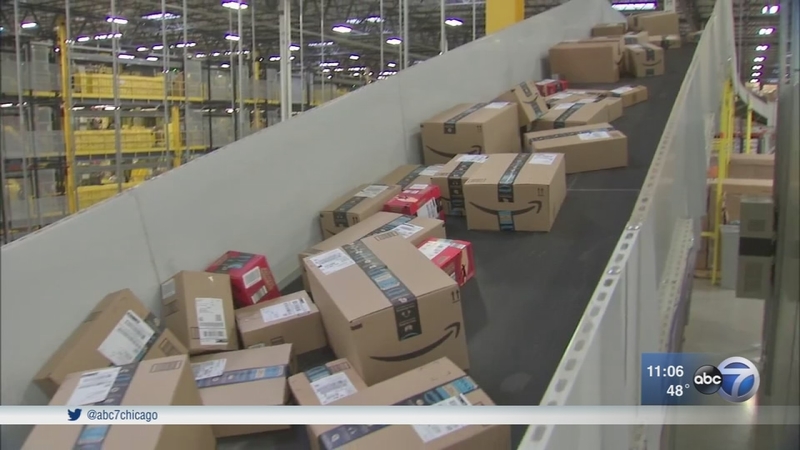 ABC7 Eyewitness News got a look at how workers make the same-day shipping magic happen on one of the busiest online shopping days of the year.

Amazon shoppers bought up more than 64 million items worldwide on Cyber Monday last year. That's about 740 items per second. The company said this year, it's going to be even busier.

Amazon has deals on toys, tablets, home goods and more on Cyber Monday. Another big seller are books, Amazon's original bread and butter.

"Last year on Cyber Monday, we had customers that ordered - on mobile devices alone - 36 toys per-second, which is pretty incredible. Great deals on toys today, too. We have our Star Wars Droid Inventors Kit, which is great for the little Jedi in your life who can build and operate their own droid. That is 20 percent off today," Amazon Spokesperson Kerri Catallozzi said.

Cyber Monday 2017 shopping guide
Planning some major online shopping on Monday? Use this guide to help you make your battle plan.

Dana Mitchell started making jewelry at her home in southwest suburban Downers Grove a few years ago. Thanks to Amazon, she's now reaching customers across the country.

"I can reach everywhere from the west to the east coast," Mitchell said. She's an Amazon Handmade Artisan.

"It just opens the door to so many people - millions of people that don't know about my jewelry brand," Mitchell said.

She said her success is thanks to enormous distribution centers like the one in Kenosha, which opened in May 2015.

He knows the online shopping holiday chaos well. This year is his ninth year in a row to work Cyber Monday.

"This is our game day. This is what our associates get excited about," Henry said.

He said this year, shipping is faster than ever, as the technology gets better across the industry.

"We change. We move at the speed of our customer's expectations," Henry said.

The Kenosha facility has more than 3,500 full-time employees and another 1,000 seasonal workers. It's about the size of 28 football fields and is one of 25 Amazon fulfillment centers like it across the globe. There are five similar locations in the Chicago area.
EMBED More News Videos

"I actually I did it on my phone. But yeah I was able to get a little cyber shopping done," Nicole Merritt said.

Merritt found deals for her daughter and a great buy on a TV for herself - all on her phone this Cyber Monday.

Some found more technology was helpful.

"I was switching between both because with Amazon you have a certain time to do it, so I was doing a little on my computer, a little on my phone, just going back and forth," said Jason Wieder.

"I was already up today, 3:30, and did one or two things for cyber shopping," Melissa Moyer said.

"The scammers see, watch TV, read newspapers and they go where the money's at," said Steve Bernas, president, BBB Chicago and Northern Illinois.

Whatever the technology, the President of the Better Business Bureau of Chicago and Northern Illinois warns against clicking on links from social media to make sure you are on the website you intended.

"When someone steers you to their site, you never know if you're getting spam or malware on your computer or where you're actually going. We advise you never to do that. Key in the URL yourself," Bernas warned.

Maxine Bacerdo was window shopping with her family, but said that when she is home later she plans to serious about those Cyber Monday deals.

"It's less of a hassle, everything gets shipped right to your door. You can go and visit as many stores as you need to online without lifting a finger. It's just a lot easier," Bacerdo said.