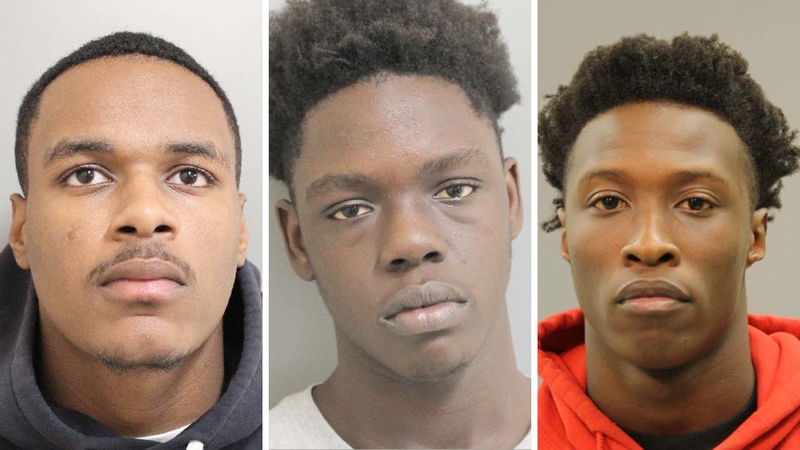 HOUSTON -- Three Cypress Springs High School students are charged with aggravated kidnapping after they allegedly took a girl from the school, forced her in a car and drove her a mile away to one of the boys' house to get her to have sex with them last Monday, court records show.

Imanuel Rizig, 17, Ryan Jeng, 17, and Justin Broadway, 18, are all charged with aggravated kidnapping.

Records indicate the girl was leaving lunch when she was approached from behind by a black male student. The female student said she was grabbed by the wrist and he told her to come with him. She said she tried to pull away, but he was too strong. He then allegedly pulled her outside and threw her into a black four-door vehicle and locked the doors.

Three other men got inside and drove her to a neighborhood near Walker Elementary School, records show. Once there, one of the men grabbed her and pulled her into the house. She was taken to a bedroom, and then, the man who took her from the school asked her if she wanted to have sex. When she said "no," and that she wanted to return to school, the man left the room and she looked for her purse and found it in another room where the other men were.

When she grabbed her purse, she claims one of the students pushed her onto the bed. When one of them asked her to have sex, she claims she again said she didn't, records show. She says she left the room, and managed to get out of the house, and then walked to Walker Elementary School and asked for someone to call 911.

The girl told police she did not know any of the suspects, but only recognized them from lunch in the cafeteria at Cypress Springs High School.

Records show police found video of the girl being abducted and others saw the abduction outside the building.
Police say they interviewed several students at the school, including those accused in the alleged abduction. Records show one student recalls driving the girl to the house, but disputes the sexual nature of the incident, saying there was no mention of sex. Another student allegedly involved in the incident said he heard others discussing "flipping" the girl involved in this case. "Flipping" means having sex with someone and then passing her to another person to have sex. Another of the students allegedly involved in the kidnapping claims the girl said at lunch she would have sex with at least one of them, but then rescinded the offer at the house.

Records note there is no video of the girl speaking with any of the men involved during lunch.

The court records state, "(The girl) was abducted from Cypress Spring High School...and taken...against her own free will. While at the location, (she was) terrorized through fear of being sexually assaulted."

The stepdad of the victim confirmed that she is in class today.

Cypress-Fairbanks ISD released this statement to parents:
Dear Parents,
I wanted to make you aware that three students from our campus were recently arrested. Our admin team is aware and is concerned about the serious nature of the allegations. Parents of all students involved have been notified.
Please know that any incident compromising the safety of any our students will not be tolerated at our school. We are cooperating with law enforcement as the investigation continues.
We are focused on continuing to provide a safe learning environment for our students. Thank you for your continued trust and support.
Related topics:
texasrapeeducationkidnappingsex assaultu.s. & worldstudents
Copyright © 2022 KTRK-TV. All Rights Reserved.
TOP STORIES
Chicago sports broadcaster Les Grobstein dies at 69
Ghislaine Maxwell ends fight to keep names of 8 'John Does' secret
Expect more worrisome COVID variants after omicron, scientists say
Cop who bungled homicide case involving Daley's nephew promoted
18K ancient Saudi Arabian tombs discovered along 4,500-year-old road
President of University of Michigan fired over alleged relationship
Chicago weekend violence leaves 29 shot, 4 fatally: CPD
Show More
Chicago protest to push for voting rights legislation on MLK Day
Walgreens, CVS temporarily close some stores as COVID surges
UK detains 2 teens in connection to Texas synagogue hostage incident
Martin Luther King Jr. seen up close in rare color photos
Illinois marks Muhammad Ali Day for first time
More TOP STORIES News