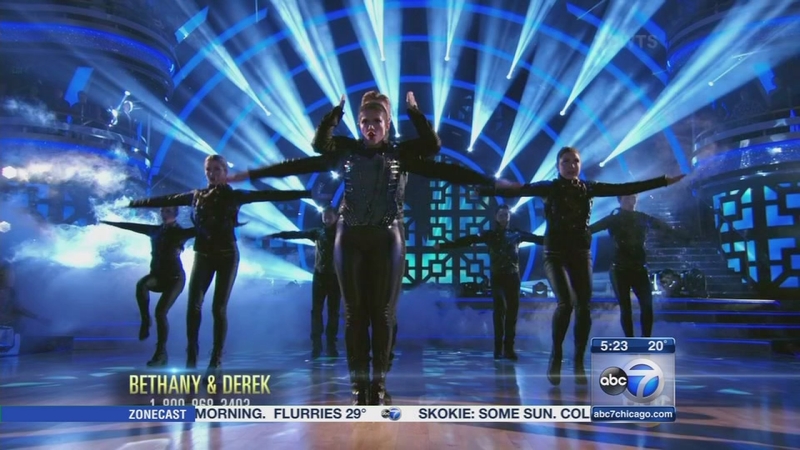 LOS ANGELES -- The judges, the celebrities and the pro dancers all seem to feel that Season 19 of "Dancing With The Stars" is too close to call. We haven't had a season without a clear front-runner or two in a very long time!

The show is stretching out the finale into two nights: the Monday night competition had everyone dancing twice, including once to a judge's choice. Later, they all took the floor again with a fabulous freestyle - a no rules, anything goes, no holds barred, no room for error routine that let everyone go out with a bang.

Three couples made it through to the next round of dancing on Tuesday night, when the mirror ball trophy will (finally!) be awarded! 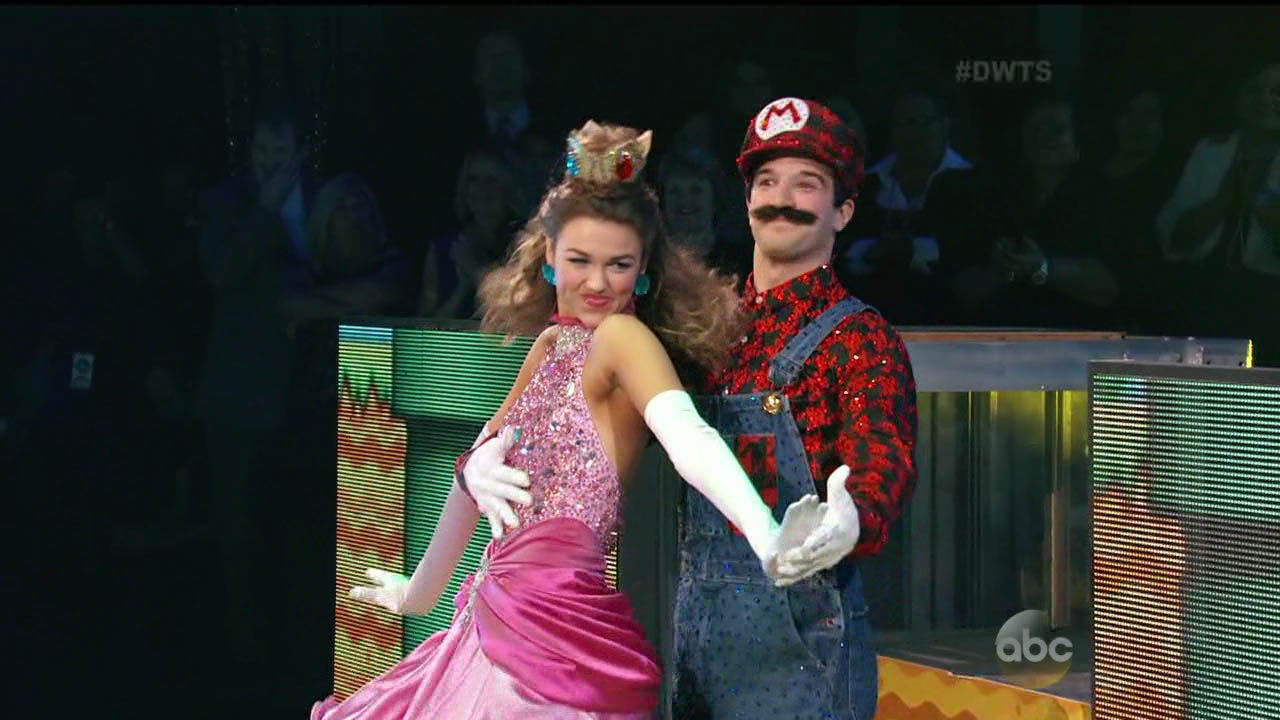 ALFONSO RIBEIRO - 40 out of 40 for Jive; 40 out of 40 for freestyle; 80 out of 80 total
Alfonso wore his emotions on the sleeve of every costume, every t-shirt, every sweatshirt during his dance days. Those emotions came from pain, exhaustion and the will to win. Carrie Ann Inaba paid Alfonso and Witney Carson a visit, and good thing! She brought along some magic potion and actually gave Alfonso's back a nice rubdown. Alfonso said he may be bruised, battered and breaking, but he was not going to give up. Their return Jive, which earned them four 9's the first week of the show, this time earned a perfect score. Carrie Ann told him he set the bar high from day one. Len Goodman said Alfonso dances like Frank Sinatra sings (I think he meant it's effortless!). Julianne Hough thought everything connected perfectly. Bruno Tonioli said the couple propelled the Jive into interstellar space!

Witney blended a taste of all the previous weeks' dances into a fun, fast-moving tribute to the art of dance. Plus, right in the middle, the tap dance kid returned! Len announced the routine was a buffet of great dancing and hoped America would realize he is the season's best dancer. Carrie Ann loved the mix of old school and new school styles. Bruno told Alfonso that he thought he had just tapped his way to the top! He praised the use of his hips, to which Alfonso replied yes, and now those hips hurt!

SADIE ROBERTSON - 38 out of 40 for Samba; 40 out of 40 for freestyle; 78 out of 80 total
Len chose this dance for a do-over because he missed it the first time around. Love the quirky take on the "Duck Dynasty" costumes! Len was also the judge who visited them at rehearsal. He told Sadie it was the little "tiddly" things that would make a difference between earning a 9 or a 10. They even danced together, which led Sadie to reveal that she's not scared of Len anymore. For some reason Liam Payne from "One Direction" stopped by. Maybe because she's 17 and adorable? Once in the ballroom, the dance is full of energy and content - so much so that Mark Ballas actually split his pants! Julianne confirms her first round score and again gives them a 10, so does Carrie Ann, who also told Sadie she did not expect to see her in the finals, but was happy she was there. Len and Bruno each gave a 9.

Mark tapped into his deep creative roots for the freestyle. Apparently, he's a Mario Bros. freak. Who knew? He called the routine unorthodox and filled with things that have never been done before. Sadie transformed into Princess Peach and the dance was non-stop fun. The audience and the judges went nuts for this dance. Julianne called it "game over!" Bruno thought it was refreshing, original and inspired. Carrie Ann said the dance belongs in the DWTS Hall of Fame. Len said he would never forget this original routine.

JANEL PARRISH - 37 out of 40 for Samba; 40 out of 40 for freestyle; 77 out of 80 total
It's another Samba redo, because the first one gave Janel one of her lower scores of the season (although, it really wasn't THAT low). She told us she felt unsteady the first time around because they had been told they were in the dreaded "jeopardy." She also said she was anxious to show what it's like to do this dance while she's feeling happy! Julianne was the judge assigned to Janel and Val's room, and it looked like a fun, productive trio. The bad news of the week began with Janel having three days of commitments on "Pretty Little Liars," which put them behind in rehearsals. Then in dress rehearsal, she tweaked her rib pretty severely. A little physical therapy, a lot of tears, some comforting words from Val later, and she hit the dance floor with a vengeance. Bruno said the dance ticked off all the right boxes: hips and passion. Carrie called it a warrior dance. Len thought it was rhythmic, clear and sharp.

Where Bethany and Sadie used lots of bells, whistles, lights and other dancers, Val chose to strip things down for a contemporary dance that can only be called a dance of love. Who knew the song "500 Miles" could be an acoustic love song? Val, that's who. The dance was fluid and showed just how much trust these two have in one another. It was filled with lifts, falls and spins - you name it - done very gracefully. Len liked that there was no messing around and applauded the way they mixed athleticism with artistry. Carrie Ann said their teamwork was immaculate. Julianne thought the dance was honest, pure and breathtaking. Bruno called it the visualization of a love poem.

BETHANY MOTA - 36 out of 40 for Jive; 40 out of 40 for freestyle; 76 out of 80 total
Bruno visited Bethany and Derek and asked them to go back in time to week one and try the Jive again. He thought Bethany was a little tentative and didn't always have the movements needed for the fast-moving dance. He also thought she improved quite a bit from before and could nail it. They had a bit of a set malfunction at the beginning of the routine and it threw both dancers off just a hair. Len said he remembered the first round and thought this was a great improvement. Carrie Ann agreed. Bruno called Bethany the ideal student. Julianne thought Bethany looked so comfortable on the dance floor now, she didn't even see Derek. Now, that's no way to talk to your big brother!

Bethany knew she was in good hands for the freestyle. Derek is great at choreographing everything, but he excels at the freestyle. There's a reason the guy has five mirror ball trophies on his shelf. The song they choose was "Revolution," and it mirrored Bethany's journey: dramatic, fierce and powerful. The lighting, costumes and troupe dancers added a great element to the routine. Len called it a five-star freestyle. Julianne said she's obsessed with Bethany. Bruno called her a "dancing Katniss." Bethany told Erin Andrews after the first round's mishap, she decided to just go for it (oh yes, she did) and be in the moment (oh yes, she was)!

If the race was too close to call at the beginning of the night, it was downright impossible at the end. Tom and Erin joked they were going to go find four trophies! But no, they had to start ticking off the names: Alfonso, safe! Sadie, safe! That left Janel and Bethany in the bottom two. And leaving the ballroom tonight... Bethany Mota.

The other three couples will return Tuesday for another dance, plus a reunion of everyone from the whole season!