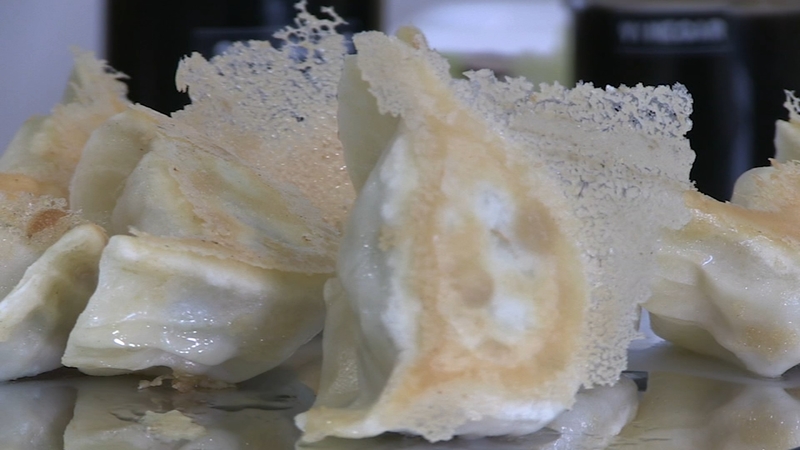 The Chinese New Year is next weekend, and our Hungry Hound has been focused on Chinese food for the past few weeks.

He says there are so many good places to get it outside of Chinatown, so every Saturday night in January he's introducing us to a different place with a different theme. Last week, it was the heartier dishes from Northern China, but tonight, it's handmade dumplings from three different locations in the suburbs.

At Dangela's Dumplings, which just opened in a Libertyville strip mall, they focus on two styles of dumplings, both from Northern China.

"We're traditional and authentic Northern Chinese Dumpling, where the dumpling is originally from," said owner Angela Su. "What's really important is the balance of the skin and the stuffing. Our skin has to be a certain thickness because you want to feel the filling, and you want to taste the tender of the skin."

Dough is made here, sent through a sheeter to get it to the proper thickness, then it's cut into circles, again by machine, and finally filled and sealed by hand. The kitchen is so confident, they installed a window so you can see your dumplings made right in front of you. You choose either boiled or pan-fried; the latter is doused in a batter near the end of cooking, resulting in a finished product with a lacey, crispy edge.

"It can show a good presentation, and it also can taste good because it's crispy," she said.

There's soy and vinegar on the tables, as well as a homemade chili sauce incorporating 10 different spices or chilies. Angela said she's worked hard to standardize the entire procedure, so the concept could be rolled out to other locations.

The dumplings are lot more colorful at Katy's Dumplings in Oak Park, the original location is still in business in Westmont, that's because they use vegetable juice to color, and then help identify what's inside.

"Customers still love it because there's all-natural vegetable juice inside," said Manager Steve Qi. "Spinach juice we use for pork and chive; the purple one is for beef and scallions; the carrot one we use chicken and vegetables."

Dough is rolled, separated and spread out, all by hand and sight. Fillings are made here too, sealed well, then boiled, or, if you prefer, they can be added to some oil to crisp-up the outsides. Having enough dumplings on-hand this week is crucial, since they represent such important symbols during the New Year.

"Because dumplings symbolized longevity and wealth. Means this New Year you're going to get wealthy, healthy and longevity. For us, we believe in that, and it's so important," said Qi.

So from Libertyville to Westmont and here in Oak Park, there are lots of places to get authentic, and delicious, Chinese dumplings for your Chinese New Year celebration.

In Steve's Extra Course Video, he takes a closer look at the slightly spicy Dan Dan Noodles from Katy's in Oak Park.

In this week's Extra Course video, the Hungry Hound takes a closer look at the slightly spicy Dan Dan Noodles from Katy's in Oak Park.