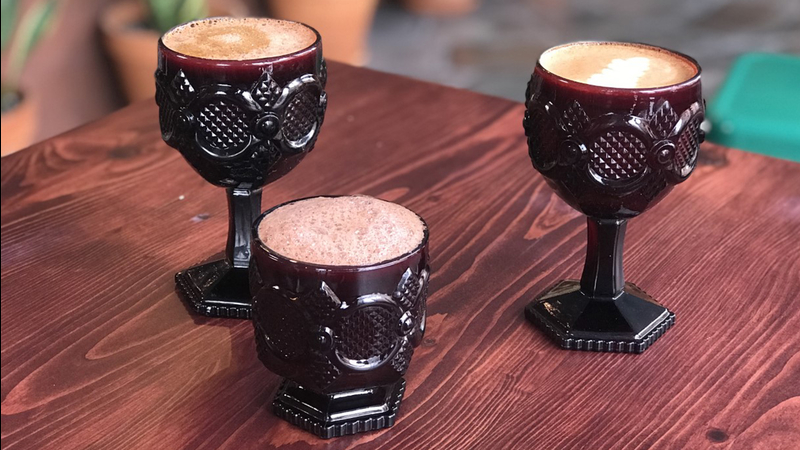 CHICAGO (WLS) -- As coffee shops around the city begin reopening -- with social distancing, masks and other precautions in place -- one local roaster is focusing as much on a Mexican chocolate as it is its own coffee beans.

One of Chicago's premier coffee importers and roasters, Dark Matter has a half dozen stores around the city dedicated to the artisan approach to coffee. But their latest store, dubbed Caravanserai, has a slightly different emphasis.

"We're focusing on a lot of Mexican flavors. We're featuring a brand of chocolate from Mexico City called La Rifa. They're really focused on influencing others to re-approach how we look at cacao and chocolate," General Manager Dan Marinaro said.

So in addition to the usual lattes and espresso-based drinks, they also have a trio of Mexican-inspired offerings.

"We're doing the traditional-style Mexican drinking chocolate, which is different types of raw cacao, we're mixing it with a different percentage of sugar, and then mixing it with hot water. That's going to bring out some really interesting fruity flavors that come from the cacao," he said.

Frothed with a traditional molinillo, or whisk, it's light and yet appropriately intense.

They also have a pair of mochas.

"Those are latte-based drinks so it's milk, espresso, chocolate; the Mayan Mocha has cinnamon and cayenne added to it as well," Marinaro said.

Finally, a Cafe de Olla, but this one is improvised a bit.

"We're using some of the sweet chocolate from La Rifa, and then we're adding espresso, cinnamon and orange zest, so it's a really cool way to see how cacao and coffee play well together," he said.

One of the reasons they play so well together, says Marinaro, is the relative similarities between the cacao pod and the coffee bean.

"It's really similar to coffee in terms of harvest and flavor profile and the way that it's processed, so for us as Baristas, it's pretty easy to obtain the information and translate it well into cacao," he said.

This is the seventh Dark Matter in the city but the first focusing exclusively on Mexican cacao. If you like chocolate even in the least, imagine how good it can be when paired with these coffee beans.

The store has also shifted to mobile ordering, so you can order on your phone for contactless pickup.