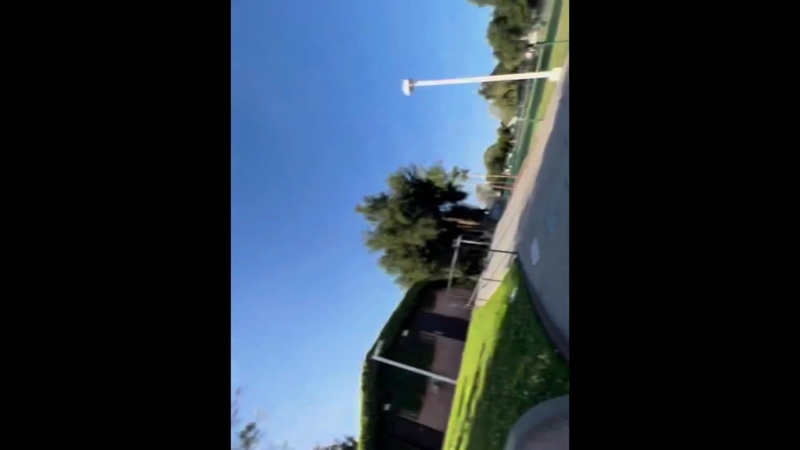 EAST PALO ALTO, Calif. -- Residents of California's East Palo Alto are gathering Wednesday evening to take back a park beloved by children and families who were caught in the crossfire as two groups shot at each other, leaving one man dead and three others wounded.

Police say 33 shots were fired, starting around 6 p.m. Tuesday evening as children were playing tag and a church baseball team was practicing for an upcoming game.

Interim Police Chief Jeff Liu said four shooters were involved, two each from what appeared to be rival groups. Their identities and the motive are still unknown.

It will be difficult for the estimated 60 people who were at the park to erase what they saw and heard.

A girl was playing tag with her cousins as one of them was taking cell phone video when gunfire broke out. One of the shooters was only 10 to 15 feet away from her. In the video, shared anonymously to ABC7 News, you see the girl running away toward the baseball field, clearly scared and yelling, "Help me!"

The girl was not hurt, but the team and spectators where she was seeking shelter from the hail of bullets were also under attack with bullets flying in different directions. Some dodged them by hiding under the bleachers. One of them, an adult man, was grazed by a bullet to the head. He did not require hospitalization.

Police said they initially recovered about 40 shell castings at the scene.

WARNING DISTURBING VIDEO: A girl playing tag at an East Palo Alto park captured the chilling and terrifying moments when a gun battle began. One man, identified as the cousin of Raiders star Davante Adams, was killed while three others were hurt. https://t.co/TWhFDH0NER pic.twitter.com/aBsppSruz7

At a Wednesday afternoon news conference, Pastor Paul Bains said of the shooters, "they broke street code, shooting where children and families were."

Police said the shooting was targeted, not random. Ralph Fields, Jr., of East Palo Alto, was shot. The 34-year-old died later at the hospital.

Fields was paroled last year after serving two years in state prison on conspiracy charges during a major gang sweep in 2014. He was the first cousin of NFL wide receiver Davante Adams, who's making headlines as he joins the Las Vegas Raiders from Green Bay Packers.

Last spring, Adams donated fitness equipment for the park, talking to our sister-station KGO about giving back to the city where he grew up. It was making a difference for East Palo Alto families, who enjoyed using the park. So many life-long residents privately shared with ABC7 News how they had seen the city improve from its murder capital reputation when they were growing up in the 1990s. They had hoped their kids, the next generation, wouldn't experience such violence. Now they're not so sure.

"You put other people and families at risk" with a shooting incident like this, said East Palo Alto native Jaime Martinez. "It just sucks. Will it have a chilling effect? Maybe."