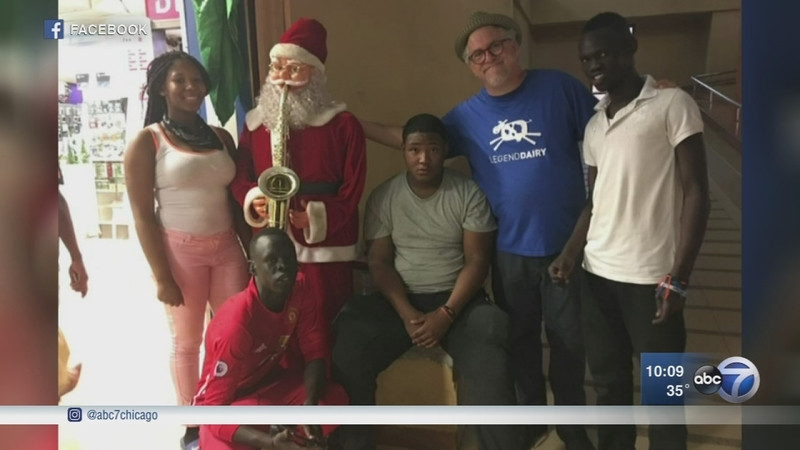 CHICAGO (WLS) -- After a 22-hour journey, two students from Chicago's Englewood neighborhood and a small film crew are back home from Uganda after a bus crash that killed their mentor.

Hayah Rasul and Terrance Dantzler were in Uganda with their filmmaker mentor David Steiner to attend a film festival with their documentary "Saving Barbara Sizemore" and to film a new documentary project about the plight of Sudanese refugees from Israel in Uganda.

Hayah made it steps into the arrivals terminal before her mother leapt into her arms.

"Overwhelmed with joy. One of the happiest days of my life. For my child to have gone through such a perilous experience and so many things could have gone wrong for her, other than losing someone so important," said her mother, Alecia Prince Patterson.

Terrance, who traveled for nearly a full day with an injured pelvis, had nothing but a huge smile at the sight of his family.

Terrance was loaded into an ambulance immediately upon arrival to have his injuries properly examined at Stroger Hospital. His mother didn't say specifically what his injuries are, but said he would be kept overnight in the hospital for treatment.

Steiner was killed in a head-on bus crash Monday. After the crash, thieves stole the students' money and passport.

"As hard as it may seem that he's gone, he would want you to keep your head up," Hayah said.

The teens and their families are mourning Steiner, who was a volunteer teacher at Barbara A. Sizemore Academy when he began working with the students on the documentary.

"He gave my daughter an opportunity that otherwise I don't know when or if she would have had it, to go somewhere," said Patterson.