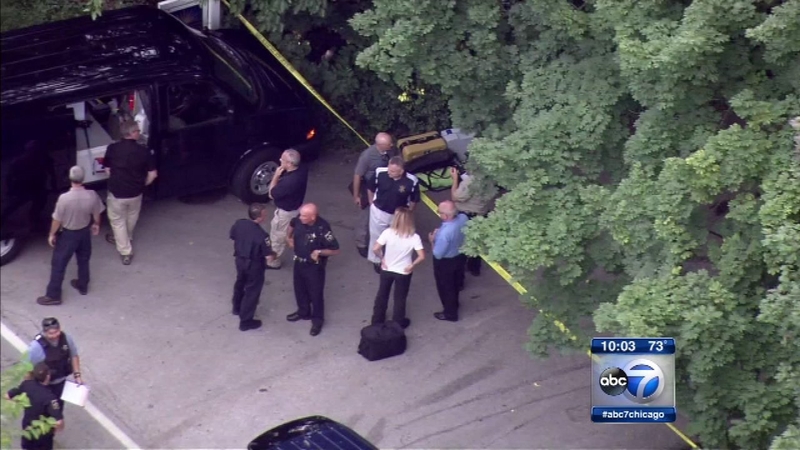 UNINCORPORATED WHEATON, Ill. (WLS) -- The DuPage County Sheriff's Office is investigating the death of an infant whose body was found in west suburban unincorporated Wheaton, Ill.

Authorities were called to the heavily-wooded residential area around 3 p.m. by two tree-trimmers who found the body in a small black backpack. Neighbors were stunned.

"I don't think even now I have digested it in my mind, that this is true, or that there was a baby here," said Stella, a nearby resident who only wanted to be identified by her first name.

The tree trimmers were at the site working for Mike Abbott.

"Devastating. Being a father of three, just unimaginable for sure," said Abbott of the discovery.

Abbott said his workers initially spotted the bag around 8 a.m. in a patch of brush along a private drive just off Plamondon Road. They thought nothing of it until they saw it again hours later.

Police have not released details regarding the infant, including its gender or the circumstances of its death.

"That's unbelievable. I don't know how anybody could do that. I have a baby, so that's insane," said nearby resident Kristin Fara.

Residents said they have had some issues in the past with teenagers using the wooded area for drinking and drug use, but nothing like this. The DuPage County Sheriff's Office is asking anyone with information on the death to call (630) 407-2400.
Related topics:
wheatondeath investigation
Copyright © 2022 WLS-TV. All Rights Reserved.
TOP STORIES
Storm forecast to drop 1-3 inches of snow on Chicago area | Radar
School Closings: Chicago Area Complete List
6 found dead inside Milwaukee home, authorities say
Family demands justice after 23-year-old woman found dead after date
Several wounded in shooting in German city; gunman dead
Woman finds $3M lottery prize in her spam folder
Woman killed in 'targeted ambush' at her birthday party in CA
Show More
22 shot, 5 fatally, in Chicago weekend violence
Little Village mourns girl, 8, killed in shooting
5 tax changes that can boost your refund this year
COVID mandate draws protestors rallying against proof of vaccination
$6M worth of cocaine laced with fentanyl seized in Wisconsin
More TOP STORIES News