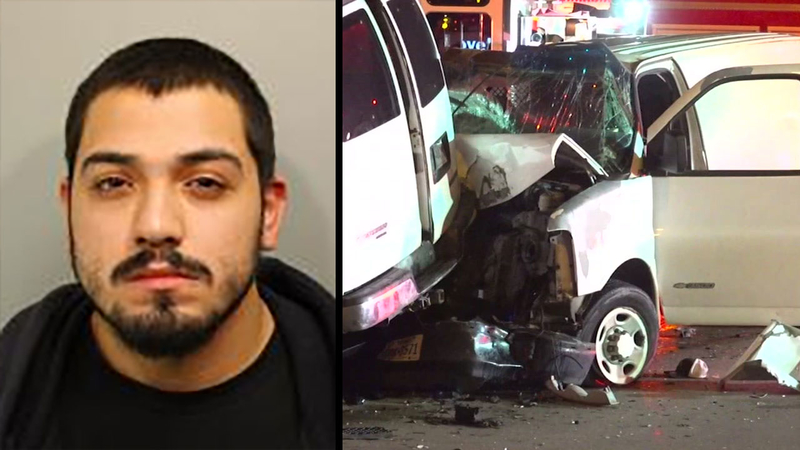 HOUSTON, Texas -- Police have charged a 22-year-old man in the road rage crash that killed an innocent man who was on his way to a job with his co-workers.

Luis Gaspar has been charged with intoxication manslaughter after authorities say he failed a field sobriety test.

HPD confirms deadly crash off I-45 and Airline drive on the feeder road. More details coming up at 4:30 on @abc13houston pic.twitter.com/Zl7NQBSKkO

The three-vehicle crash that Gaspar was involved in happened at the intersection of the I-45 feeder and Airline in north Houston around 2:30 a.m. Monday.

Police tell Eyewitness News it all started when Gaspar and the driver of a Chrysler had an argument at a club, which then escalated into road rage.

"It appears from what we heard earlier on that they possibly were engaging in a type of road rage, maybe hitting each other, racing and they drove off from the club," said Dionne Griffiths with the Houston Police Department.

The Chrysler driver ended up going westbound on Airline and ran a red light. That's when a van carrying four men headed to work at a construction site slammed into the car.

Authorities say the workers' van, which was on the service road, had the right-of-way as it prepared to make a left turn.

Six people were taken to the hospital.

The driver of the workers' van suffered minor injuries. Another person had possible injuries to his liver.

Investigators have not said yet if the driver of the Chrysler was intoxicated.