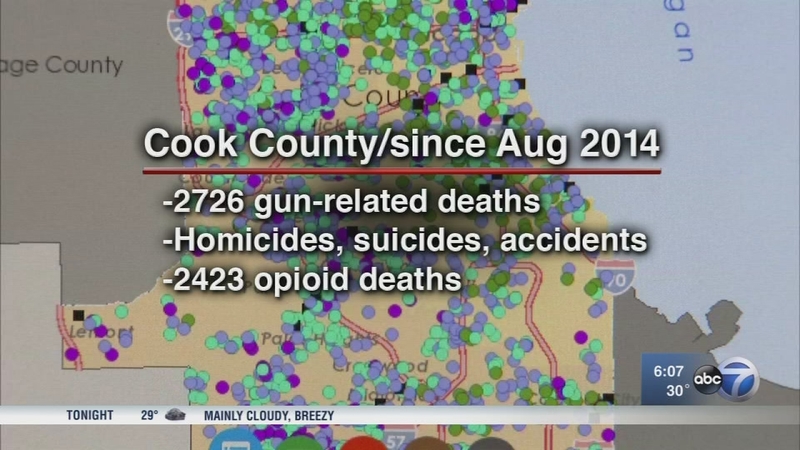 CHICAGO (WLS) -- The latest move toward government transparency in Cook County is an eye-opening website of death data.

It is not for the squeamish.

Statistics now available on the Medical Examiner's website reveal that there have been 2,726 gun-related deaths in Cook County since August of 2014. That includes homicides, suicides, and accidental. During the same period, there were 2,423 opioid deaths. When the 464 suicides-by-gun are removed from the equation, there are slightly more opioid deaths than gun deaths.

The city of Chicago accounts for the vast majority of gun and opioid deaths according to the ME's new public database. 79 percent of the county's gun related deaths occurred in Chicago and 66 percent of opioid related deaths.

"We created these online tools to make the Medical Examiner's data easily accessible to residents" said Cook County spokesperson Becky Schlikerman. "It's another example of Cook County Board President Toni Preckwinkle's commitment to open data, transparency and accountability" Schlikerman told the I-Team. The statistics are updated daily, according to county officials.

Even though death and taxes are the only two certainties in life (at least according to Benjamin Franklin) the death data website is not requiring any additional taxpayer funding, according to county officials. "There were no costs incurred because it was done by in-house staff as part of their regular duties" said Schlikerman.

The most common age for gun deaths in Cook County since August, 2014 has been 21. There have been 140 victims of gun violence who were 21 years old. Perhaps most surprising is the worst age for opioid deaths according to the records: 51. There were 77 opioid overdose fatalities of 51 year olds.

On the subject of age: the ME's data shows there were three-gun related deaths of infants, age one year old. 247 children younger than 18 were dead in gun-related incidents during the time frame. On Tuesday, as the new database was up and running, Cook County Board of Commissioners President Toni Preckwinkle was joined by leading clinical experts to discuss gun violence as a public health issue in Cook County.

"When we talk about gun violence in Chicago, Cook County and America, we rarely frame the issue as a public health crisis. And that's wrong. Because for every other health issue or disease affecting our communities - whether it's the flu or cancer or AIDS - we rely on clinical data to inform our governance, legislation and science to try to improve outcomes for our residents and patients," President Preckwinkle said in a statement. "Willful ignorance to our gun crisis enables it to flourish."