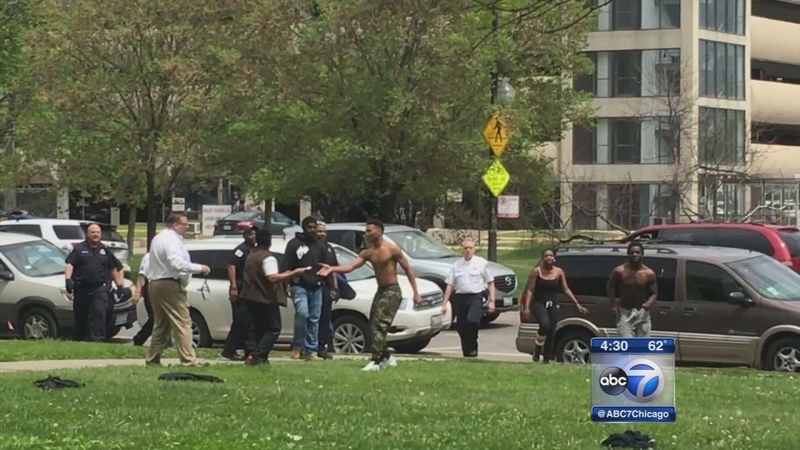 CHICAGO (WLS) -- A brawl erupted between families moments after an emotional court hearing at 26th and California for a mother charged with providing the switchblade her 13-year-old daughter allegedly used to kill 15-year-old Dekayla Dansberry.

Tamika Gayden, 35, charged with first-degree murder, is being held without bail after Gayden and her daughter were accused of killing a 15-year-old girl.

Police say Gayden gave a knife to her 13-year-old daughter, who then stabbed DeKayla Dansberry during a fight last Saturday.

Prosecutors say Gayden told her daughter to confront her rival, Dekayla. Prosecutors say the 13-year-old lunged at Dekayla with the switchblade even though they weren't directly fighting. The younger girl then ran back to her apartment, where she washed the knife and another witness allegedly wrapped the blade in tape.

In court, Gayden appeared to hold back tears. Dekayla's mother saw that but was too distraught to speak. She left court later with victims' advocate Andrew Holmes and family members after a fight erupted outside. Sheriff's deputies made no arrests.

"Two little girls are having a dispute, and one is given a knife by her mother and basically encouraged to kill another little girl," the judge said. "I find that despicable and unconscionable," Judge James Brown said.

The judge says Chicago's 235 murders in 139 days is "unprecedented violence" and "insane."

Police said the girl was stabbed in the chest around 7:30 p.m. at the Parkway Gardens Homes near West
+ 64th and South King Drive in the West Woodlawn neighborhood.