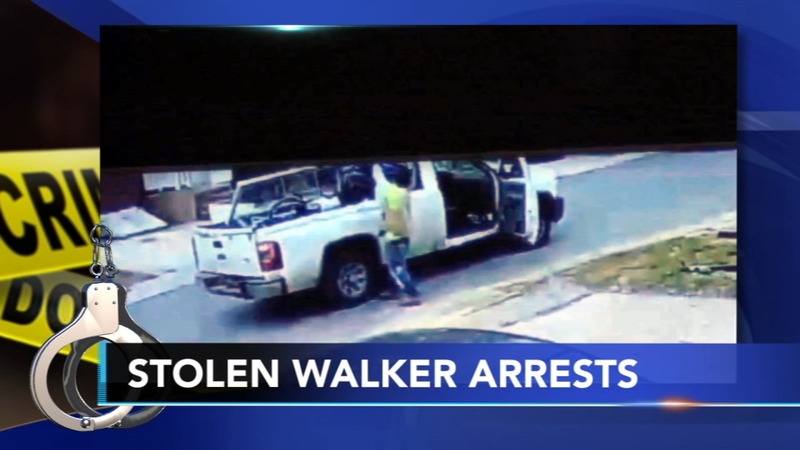 WILMINGTON, Del. -- Two men have been charged in connection with the theft of a walker belonging to a young girl with cerebral palsy in Wilmington.

Fifty-one-year-old Leland Watson and 49-year-old Donald Cale have been charged with theft and conspiracy. Watson is additionally charged with possession of heroin.

Brittany Murray said she wheeled her daughter, Kirsten Edwards-Alexander, out to the car last Thursday, placed her in the vehicle and then drove away, accidentally leaving the walker behind in the front yard of their Rodney Drive home.

2 men arrested after walker stolen from girl with cerebral palsy. Walter Perez reports during Action News at Noon on December 5, 2017.

Police said when Murray realized her mistake, about 20 minutes later, she contacted her husband who was still at home. Investigators said when the husband looked out the window the walker was gone.

As a result, Kiersten's sense of independence was also stolen.

"I wish I could walk right now but I can't. So that is how I feel deep inside," she said.

Surveillance video supplied by a neighbor shows that within a minute of the two driving off, a man in a white pick-up truck pulled up and took the walker.

Murray says she is certain the right men were arrested because they actually came back to her house on Monday night.

"They wanted to apologize for taking the walker. He didn't know it was a child walker," she said.

Unfortunately, the walker is gone.

"We were able to find out that the Walker was taken to the scrap metal yard and has since been recycled," said Mst. Cpl. Michael Eckerd of New Castle County

Murray says the alleged thieves gave her an older, beat up version of the walker to make up for what they did.

They even made a request.

"One of the gentlemen said to me that they wanted me to reach out to the new stations and the police to let them know they came by to bring her another walker," Murray said.

Meanwhile, the public outpouring of support from people all across the Delaware Valley has left his family speechless.

"It is honestly so much that we are really having a hard time keeping up with a lot of this," Murray said. "We were just really grateful for it."

"It makes me feel good to know that people actually care about me," said Kirsten.