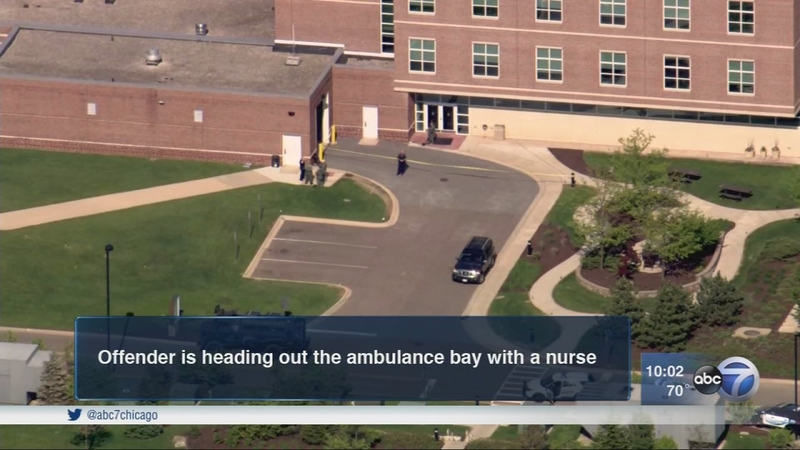 GENEVA, Ill. (WLS) -- A 21-year-old Chicago man, who held a two nurses hostage over the course of about three hours at a Geneva hospital, was fatally shot Saturday afternoon as SWAT teams moved in on him, authorities said.

Delnor-Community Hospital was on lockdown Saturday afternoon after Tywon Salters, an inmate in the custody of the Kane County Jail, grabbed a correctional officer's weapon, according to the Kane County Sheriff's Office.

The two nurses who were taken hostage were not severely injured, police said. A SWAT officer also sustained non-life-threatening injury when a bullet hit his protective gear, officials said.

The incident started at about 12:30 p.m. in Salter's hospital room on the third floor of the hospital. He was being treated at the hospital since May 8.

It was on the third floor that he took the first nurse hostage using the officer's 9mm gun, said Joseph McMahon, the Kane County State's Attorney, late Saturday.

While the specifics were still under investigation, McMahon said Salter moved down to the ground floor to a small room near the hospital's emergency room, taking another nurse into custody. It wasn't immediately clear how the first nurse escaped.

At about 4 p.m., Salters was killed when SWAT officers moved into that room after negotiators were unable to get him out, said Lt. Patrick Gengler, of the Kane County Sheriff's Office.

The officer's gun was recovered at the scene, McMahon said.