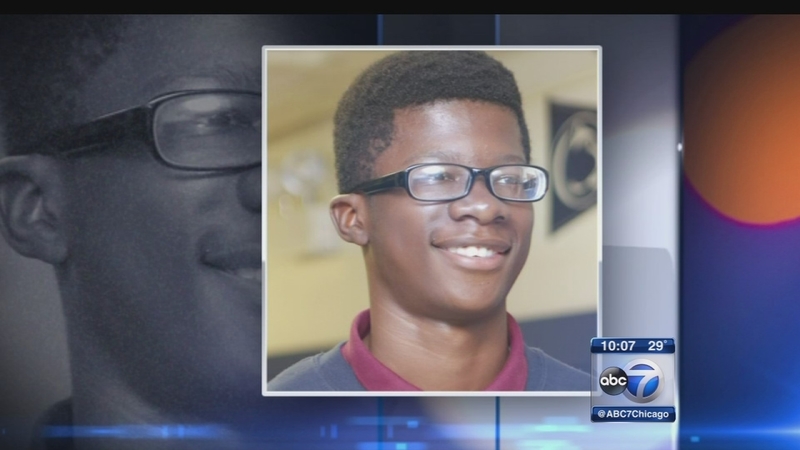 CHICAGO (WLS) -- A public viewing was held Friday evening for Demario Bailey, the 15-year-old student who was fatally shot last weekend. His funeral is set for Saturday.

On Friday, friends, classmates, and neighbors of Demario paid tribute to a young man who had a bright future.

"He was such a great kid, and he inspired everybody in the school just to be better and do better. And you have to live out his legacy and make it your own," said Jasmine McKeehan, Demario's friend.

There was no forgetting just how young Demario Bailey was when he died - it was reflected in the youth of so many of the mourners.

"I couldn't cry anymore, you know. I was actually, I was filled with peace when I saw how happy, how peaceful, he looked," said Devon Davis, Demario's friend.

There was another gathering Friday afternoon at the grammar school Demario once attended, Ruggles Elementary in Chatham. Students paid tribute to the slain 15-year-old after school with banners that they plan to sign and present to Demario's family. Organizers say it's important that these young kids understand who Demario was.

"I hope they take a mind to want to do better, a mind to want to be different when they get older than what they see around them. A lot of times, kids become a product of their surroundings," said KenDal Thurman, Demario's friend.

"He was not somebody you would expect something like this to happen to, going to school, doing everything the right away. The last time we talked, he was excited about going to college," said Cee Powell, Greater Chatham Alliance.

Demario was shot and killed beneath a viaduct at 63rd and State after relatives say he refused to hand over his coat to a group of robbers. He was walking with his twin brother Demacio. Three 17-year-old boys and a 16-year-old have been charged in the alleged robbery and murder.

"You would think that he would be the one to fulfill his dream, if no one else. So it's sad to see him go," Davis said.