Dennis Intermediate School Shooting: Suspect shoots self after exchange of gunfire inside school in Richmond, Indiana 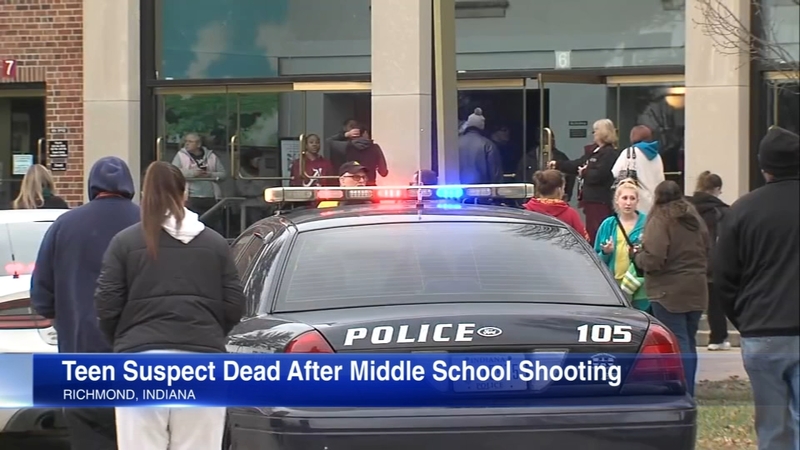 Dennis Intermediate School Shooting: Suspect shoots self after exchange of gunfire inside school in Richmond, Indiana

Indiana State Police said at about 8 a.m. they received an alert from Richmond police about a potential violent act that could occur at the Dennis Intermediate School.

Officers from multiple agencies responded to the school, where they encountered a teenage suspect who reportedly shot out the glass of a locked entry door to the school and ran inside the school with officers chasing, police said. The school had already been placed on lockdown.

Once inside the school, the suspect exchanged gunfire with officers and then fatally shot himself, police said. Authorities have not released the name of the suspect, who was 14 years old and was not a student at the school.

No officers or students were injured in the shooting. Police said they received a warning before the incident occurred.

At a news conference after the shooting, Indiana State Police Captain David Bursten emphasized that further tragedy in this incident was avoided because police were alerted to the potential act of violence.

"Had they not made that call, there is no doubt in my mind that we could be having a much different conversation right now," Bursten said.

Authorities would not say who alerted police about the shooter.

The school was also prepared and effectively executed its safety plan, authorities said.

All Richmond Community Schools were placed on lockdown. The school district said Dennis students were transported to Richmond High School for parents to pick them up. Other Richmond schools would follow normal dismissal times, the district said.