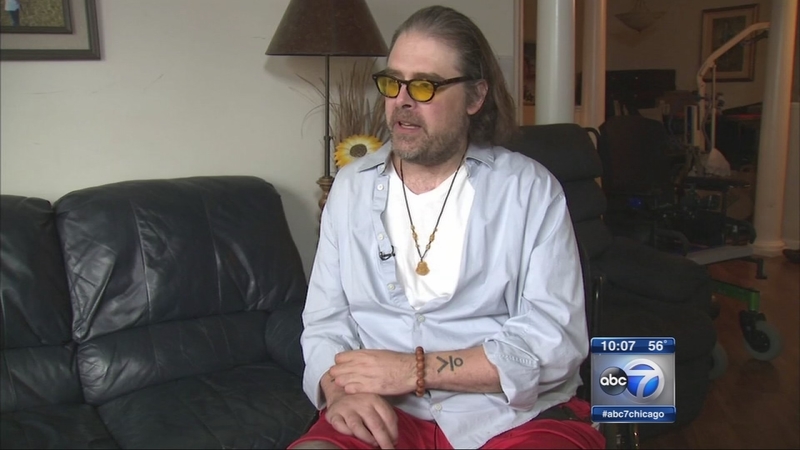 OAKBROOK TERRACE, Ill. (WLS) -- A former Chicago cop who is now paralyzed after he was involved in a crash in the line of duty says the city does not have his back.

Densey Cole, 44, has lived in Oakbrook Terrace for the last five years and is now facing eviction. Cole says his landlord is owed $18,000 - money the city of Chicago has refused to pay.

"How does the little fish fight all the big fish in the big pond?" Cole said.

Cole has been ordered to vacate his Oakbrook Terrace apartment next week. The eviction notice was delivered to him last month, nearly six years to the day his life forever changed.

In May 2009, Cole crashed his police vehicle while responding to a burglary call near 98th and Halsted. Cole was unable to move as a witness stole his gun and wallet.

The incident left Cole paralyzed. His mother, also a former officer, says Alderman Ed Burke, chair of the city's Finance Committee, made her a promise invoking the name of another paralyzed officer.

"You don't have to worry about your son, Mrs. Cole. I built a home for Jim Mullen, and I'll make sure that Densey also has a home," said Louise Cole.

But Cole says after the city declined to pay to make his home handicap-accessible, he was forced to sell it and eventually move into an Oakbrook Terrace apartment.

The city initially agreed to pay rent and utilities, totally $4,000 a month. But a year ago, the city sent a letter to Cole saying it would no longer pay utilities. The amount owed is $18,000.

In a statement, a spokesperson for the Finance Committee said: "We have great respect and sympathy for [Cole] and we have consistently acted to remain very flexible in numerous instances given the circumstances of his case."

"Faithless. I have no faith in them. None. None whatsoever. No," Cole said.

Cole's eviction date is July 8, and he plans to fight it in court. The Chicago Police Memorial Foundation has arranged for an attorney to represent him.