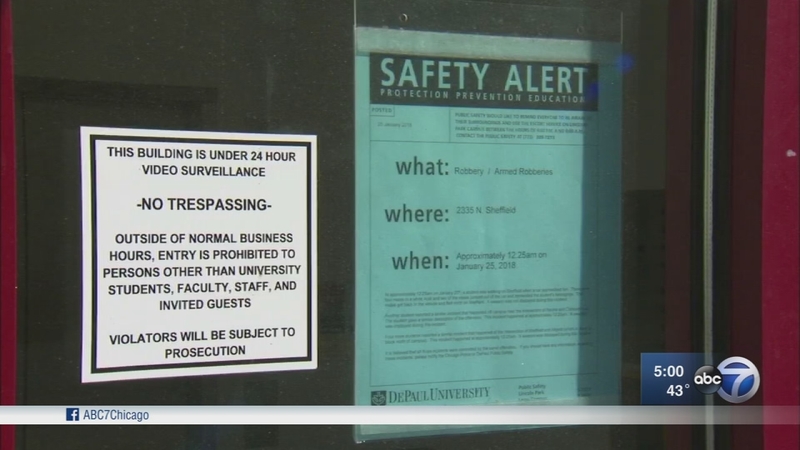 In the first incident, a student was walking near the intersection of Racine Avenue and Clybourn Avenue at around 12:20 a.m. when multiple offenders showed them a weapon before taking their belongings.

Just a few minutes later, at around 12:25 a.m., a student was walking on Sheffield Avenue when a white Audi approached him and four men got out of the car, demanding the student's belongings. The offenders then got back in their car and fled north on Sheffield, police said.

Four other students reported an armed robbery that night at the intersection of Sheffield Avenue and Altgeld Street.

"We were walking down the street and a white Audi pulled up next to us and the door open and three kids got out. Each of them had a gun," said Isabella Eleuterius, a student.

The young men told them they were being robbed.

"I just had my wallet in my hand. I already took it out because I knew what was going to happen. So I just handed the guy my wallet and he moved on to our friend who was standing to the left me," said Grady Cole, a student.

"My friends and I won't stay at the library past 10 anymore because we know if we have to walk home, we can't," said Kate Winingham, a graduate student.

"In the aftermath of this concerning sequence of incidents -- a robbery and two armed robberies -- DePaul's Public Safety continues to work with the Chicago Police Department 18th District and Area Central Detective Division to make our neighborhood safer. We remind students, faculty and staff to report any suspicious activity to Chicago Police by calling 911, or to call DePaul Public Safety at 773-325-7777," said Director of Public Safety at DePaul University Robert Wachowski.

"This can't be tolerated. While the police have offered us more resources, additional police is not enough, we have to have consequences for crime that occurs," said Alderman Michelle Smith (Ward 43).