'It felt a lot better than issuing a citation,' Ind. deputy saves woman with Heimlich maneuver during traffic stop 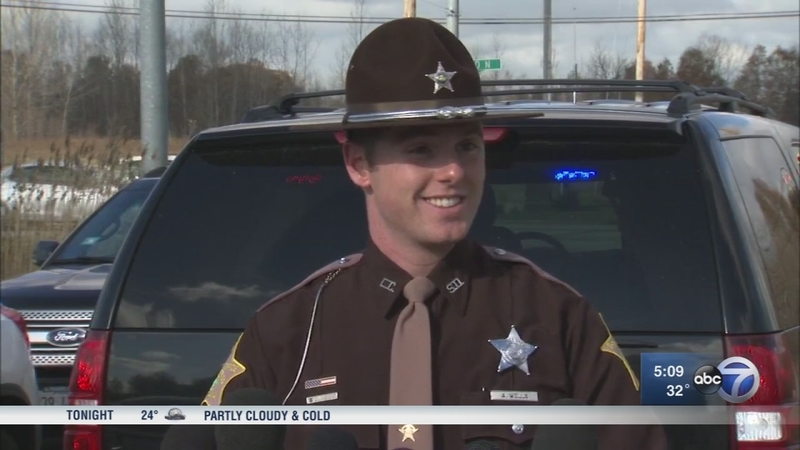 A La Porte county deputy pulled a woman over near Michigan City, then realized she was choking.

It was just after 10:30 a.m. Tuesday when La Porte County Sheriff's Deputy Austin Wells had a traffic stop that he'll never forget.

"I was kind of in shock to be honest with you. I have made hundreds of traffic stops," Deputy Wells said. "I was travelling southbound on U.S. 421 out of Michigan City and noticed a vehicle coming toward me at a pretty high rate of speed, clocked the vehicle going 70 mile per hour in a 45 Mile an hour zone."

After he pulled over the 65-year-old woman, he could see she was struggling to breathe.

"The driver had a very deep reddish, almost purple look in her face and her lips were a little blue tint," Wells said. "She kept making a couple of gestures towards me that she was unable to breathe."

Wells pulled the woman from her car and performed the Heimlich maneuver.

"I ended up dislodging what ended up being a honey mustard nut from her airway," Wells said. "She was very thankful. She just kept repeating, 'thank you, thank you.' She was very scared and I would have been too if I was in that situation."

The woman told the deputy she was in a panic, searching for a place to pull over. That's why she was speeding.

"Had she passed out due to not being able to breathe, she could have struck a tree and injured herself or struck another vehicle," Wells said.

Deputy Wells graduated from the Indiana Law Enforcement Academy in June. He has been on patrol for five months.

"Any traffic stop is any given thing you never know what's going to happen when you walk up to the car. Obviously Deputy Wells relied on this training," said La Porte County Sheriff's Office.

Once EMS arrived, she refused medical treatment and continued on her way.

"I don't feel like a hero. I was just doing my job and I was happy I was in the right place at the right time," Wells said. "It felt a lot better than issuing a citation or warning. That's for sure."
Report a correction or typo
Related topics:
michigan cityherorescuepolice officerfeel good
Copyright © 2022 WLS-TV. All Rights Reserved.
TOP STORIES
Security guard hurt after confrontation at suburban Walmart: police
Some peanut butter recalled for potential salmonella
Security guard shoots man in buttocks at Millennium Park
'Absolutely terrified' teen boy dies hours after 'sextortion' scam
Wedding guest budgeting tips
'Multiple people' injured in shooting in northern Indiana: police
10 shot in weekend violence, Chicago police say
Show More
Chicago mass shooting victim ID'd as father of 2, with twins on way
Chicago police warn of robberies on Near North Side
At least 1 dead, 44 injured after tornado strikes northern Michigan
Weather for Preakness could be hottest in history of race
First formula flights from Europe to arrive this weekend
More TOP STORIES News