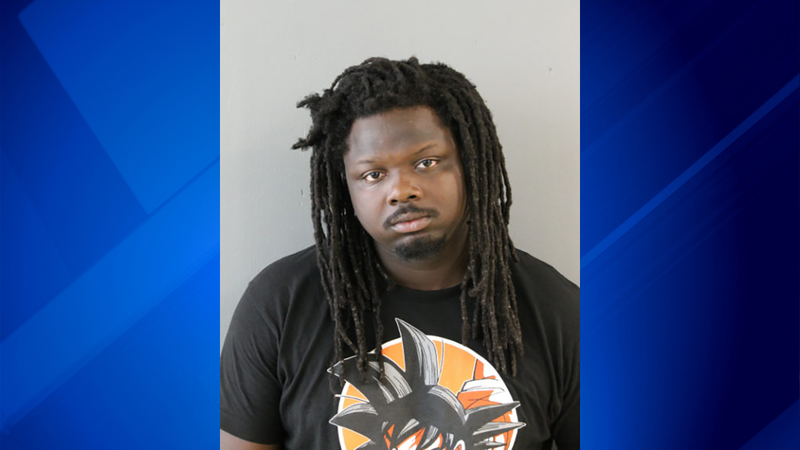 CHICAGO (WLS) -- One of the men convicted in the 2009 murder of 16-year-old Fenger High School honors student Derrion Albert is back in custody on a new gun charge-and now being held without bond-the I-Team has learned.

Sunday afternoon, Chicago police arrested 24-year-old Dionte Johnson in the 10700-block of South Cottage Grove after a foot chase. According to police, officers on patrol saw Johnson "grab at an object in the front of his waistband" and approached him on the 10700-block of South Champlain Avenue. When officers "attempted a protective pat down," Johnson allegedly jumped over a porch railing and ran away from the officers. During the chase, officers say they saw Johnson pull a semi-automatic handgun from the front of his pants and throw the weapon. Officers placed Johnson into custody after the chase and recovered the weapon.

In April, the I-Team broke the story that Cook County State's Attorney Kim Foxx decided not to pursue a stiff sentence against Johnson shortly after she took office.
EMBED More News Videos

Chuck Goudie and the ABC I-Team investigate as the family of 16-year-old Derrion Albert wants to know why one of the men convicted in his murder is now free.

In 2009, Cook County prosecutors charged four teens involved in the gang melee that led to Albert's death as adults. Three were convicted of murder at trial. One pleaded guilty. All are serving prison sentences.

But one teen, Dionte Johnson, was 14 at the time. Prosecutors say he punched Albert and knocked him down, saying that he signed "his death certificate."

Prosecutors decided to charge him as a juvenile in a special kind of case called an Extended Jurisdiction Juvenile prosecution or EJJ. That means although Johnson was convicted as a juvenile, he was also sentenced to 30 years as an adult on the underlying offense of murder. However, that sentence would be stayed and not enforced unless he was convicted of a new felony after being released from juvenile custody.

In 2015, Dionte Johnson, out of juvenile prison, was arrested and charged with felony aggravated fleeing after a Chicago police chase. Court records obtained by the I-Team show prosecutors filed notice that they were "seeking to revoke stay of his adult sentence." Johnson was convicted of the felony on November 8, 2016. Soon after, the Albert family says they were called to a meeting at the juvenile court building with new State's Attorney Foxx to be told that Cook County prosecutors were no longer seeking to enforce the 30-year sentence. Instead, they asked a judge for probation.

In response to the I-Team's previous reporting, a spokesman for State's Attorney Foxx sent the following statement: "Based on the Class 4 Felony, which carries a sentencing range of probation or up to three years in prison, it was not in the interest of justice to pursue a 30 year prison sentence in this case." After our reporting, Foxx and the family of Derrion Albert met to discuss the States's Attorney's decision to not enforce the sentence.